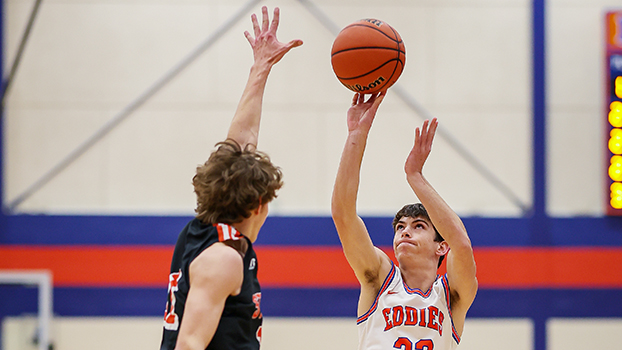 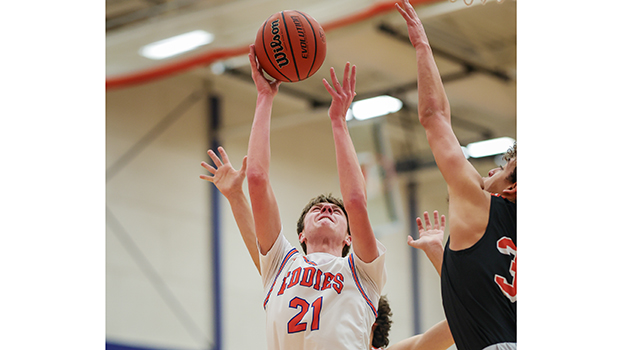 EdwardsburgLeader photo/JEFF DOUGLAS junior Owen Eberlein (21) goes up for a shot in the paint during the matchup with Sturgis at Edwardsburg High School in Edwardsburg, MI. 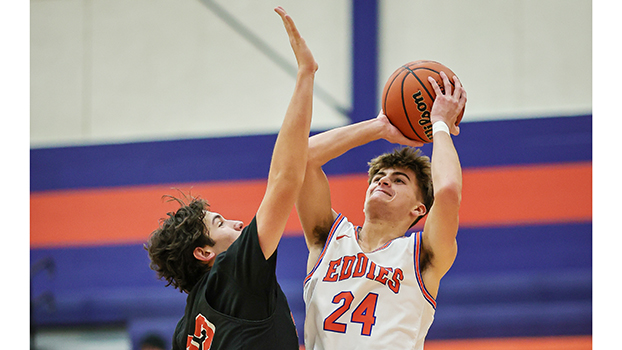 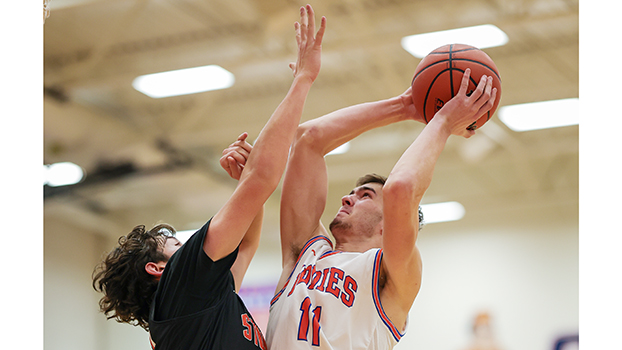 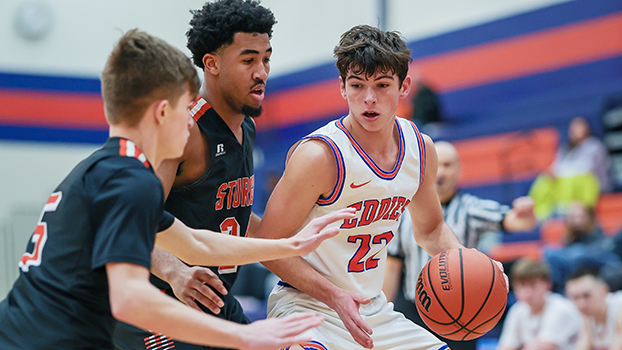 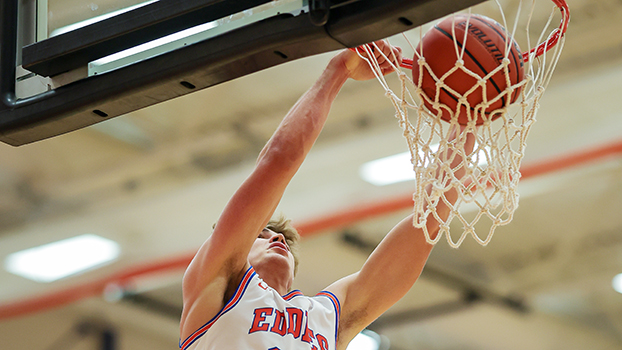 EdwaLeader photo/JEFF DOUGLASrdsburg senior Luke Stowasser (23) with the dunk late in the game with Sturgis at Edwardsburg High School in Edwardsburg, MI. The Eddies went on to win 55-42.

EDWARDSBURG ­ — Host Edwardsburg remained tied for the top spot in the Wolverine Conference South Division with a 55-42 win over Sturgis Tuesday night.

In other games, the Cassopolis boys basketball team stayed in the hunt for a Southwest 10 Conference championship with a 53-42 win over host White Pigeon. In girls basketball, the Rangers defeated White Pigeon 55-46, while visiting Dowagiac dropped a 51-24 decision to Paw Paw in a Wolverine Conference non-divisional matchup.

The Eddies improved to 3-1 in the South Division by pulling away from the Trojans over the final three quarters.

After leading 12-11 after one quarter, Edwardsburg outscored Sturgis 43-31 in the final 24 minutes to move to 8-3 on the season. The Eddies led 26-16 a halftime after holding the Trojans (5-5, 1-2 Wolverine South) to five points in the second quarter.

Jacob Thompson scored a game-high 25 points for Sturgis, which also got 14 points from J.J. Stevens.

The Eddies will travel to Three Rivers Friday night for a battle of first-place teams.

Cassopolis ran its winning streak to four games with its win over the Chiefs Tuesday night.

After a slow start to the season under new Coach Jared Rusher, the Rangers moved to 5-4 overall and 5-2 in Southwest Conference games. Cassopolis started the season 1-4.

The contest was tied at 10-10 after the opening eight minutes of play, but the Rangers outscored the Chiefs 17-12 in the second quarter to take a 27-22 halftime advantage.

Dylan Carper and Daniel Jackson both had 12 points for White Pigeon, which drops to 4-3, both overall and in conference play. Chris Jackson added 10.

The Rangers travel to Comstock for a Southwest 10 Conference contest Friday night.

The host Rangers won their second consecutive game as they improved to 7-4 overall and 6-3 in the Southwest 10.

Cassopolis jumped out to a 15-6 lead after one quarter, but the Chiefs rallied to cut the lead to 22-19 at halftime.

The Rangers outscored White Pigeon 33-27 in the second half to earn the victory.

Jamielynn Delarye scored a game-high 18 points to pace White Pigeon, which drops to 1-9 overall and 1-8 in conference games.

After being shut out in the opening quarter, Dowagiac tried to claw its way back into its game with Paw Paw.

Dowagiac was unable to keep up the pace in the second half and was outscored 34-9, as the Red Wolves improved to 9-2 on the season.

“Last night, we played a really good second quarter,” said Dowagiac coach Jason Turner. “Our third quarter was also pretty good. We have got to do a better job at playing a full 32 minutes. It is a big struggle when you start off down 10 to 15 points and have to fight and claw your way back in. I like the fight my girls showed last night in the second quarter, but when you are playing from behind, it’s much more tiring. We just ran out of steam.”

Alanah Smith, who entered the game averaging more than 12 points per game, was held to seven points by the Red Wolves. Calley Ruff added six points and Makayla Hill five.

Grace Mitchell and Katelyn Barey both scored a game-high 14 points for Paw Paw.

The Chieftains return to South Division action Friday night as they travel to Sturgis.