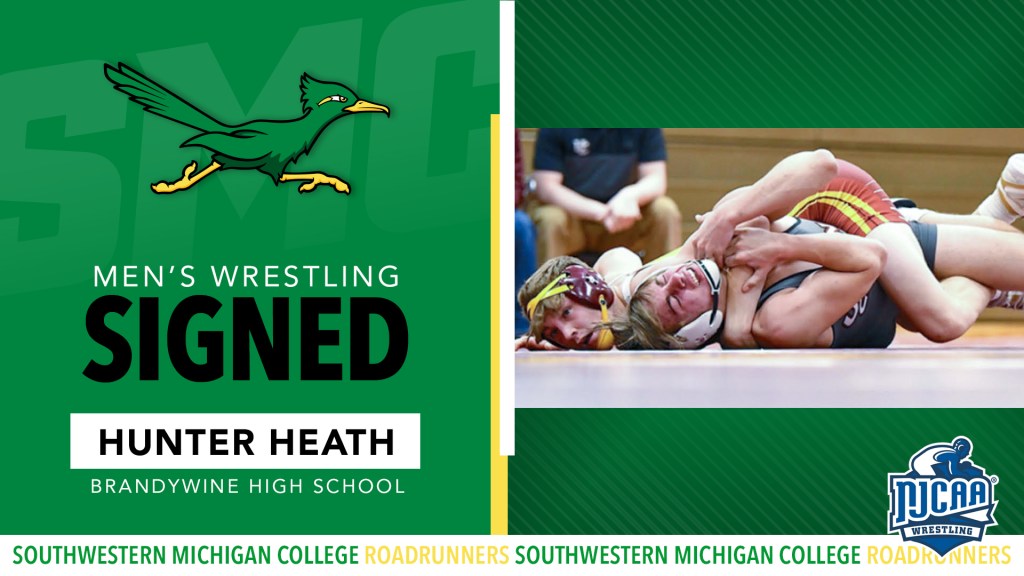 As a four-year starter at Brandywine, Heath has a high school career record of 174-17, with 79 career pins. He has competed in four weight classes: 112, 130, 140 and 160. Heath is a four-time individual BCS Athletic Conference champion, a four-time district champion and a two-time regional champion, placing in the state tournament three times (fifth in 2019, seventh in 2020, third in 2021).

In 2020, Heath became the school’s first individual Greater Berrien County champion since 2003. He ranks third all-time in wins at Brandywine High School (174), holds Brandywine records in team points in a season (259 in 2020), best sophomore record (51-4 in 2019), best junior record (51-4 in 2020), and best all-time winning percentage (.911). He is a four-time All-Southwest Michigan Team selection, was named team captain three times, and was the first-ever four-time most valuable wrestler.

Heath also lettered in football and baseball at Brandywine.

“In all my years of coaching wrestlers, Hunter is, without a shadow of a doubt, the most talented kid I’ve ever coached,” said Brandywine Coach Rex Pomranka. “He was challenged more than any other wrestler of his caliber than I can think of. We literally bumped him up to face returning state qualifiers and matched him up with the best kids around his weight class since his freshman year knowing that with the confidence he had in himself he could win for us. He just worked extremely hard and wasn’t afraid to face anyone. He was 82-17 all-time against wrestlers who qualified for the regional tournament or higher, and that is pretty remarkable in itself.”

Hesson is very familiar with Health as his Niles wrestling teams faced him several times.

“As a three-time state placer, and a four-time state qualifier, Hunter is a hard-working wrestler that will bring a lot of experience to our wrestling room,” he said.