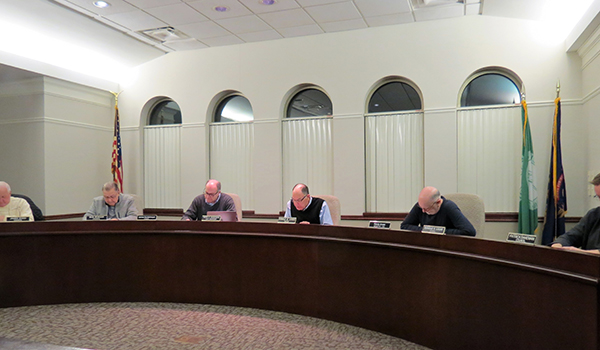 DOWAGIAC — A development project near downtown Dowagiac is one step closer to reality thanks to a property that became available earlier than expected.

At Monday’s regular meeting, the Dowagiac City Council approved the purchase of 511 S. Front St., the former site of Myer Forklift, for $125,000 as part of a future development project anchored by Dowagiac Creek and Lions Park.

City Manager Kevin Anderson said the council had talked about acquiring the property in early 2021, with the expectation the process of purchasing could take many years.

“There was no particular rush on it,” Anderson said. “We weren’t expecting to do it in eight or nine months, but sometimes, as these things come forward, it’s time to take a look.”

The city had previously authorized the purchase of 507-509 S. Front St. at the Dec. 13 meeting, and Anderson said while none of the sales have closed, the city intends to combine these properties for an undetermined project.

“Redevelopment of this area is a long-term vision that can best be accomplished by taking a series of steps which include purchasing properties as they become available,” Anderson said in a Jan. 20 memo to council members. “The city has a long history of long-term redevelopment including the block on which the James Snow Building is located and the Commercial/Division Street redevelopment anchored by the library, theater and post office, and the process for the S. Front Street redevelopment will be similar.”

The purchase is subject to environmental reviews, as well as the closing of the adjacent properties.

In other business, council approved a Greater Dowagiac Chamber of Commerce request to host the 25th annual Ice Time Festival on Saturday, Feb. 5, during which members of the Michigan Ice Carving Association will create art sculptures along Front, Beeson and Commercial streets.

Several members of council, along with the Mayor Don Lyons, expressed excitement for the event.

Council also approved a resolution to add Mayor Lyons as an authorized signatory to the closing of the old Zeke’s property, 105-109 S. Front St., which is to become Barred Owl BBQ.

“Things are coming along quite nicely there,” Lyons said. “It’s safe to say you won’t recognize the place when you step inside.”

The new owners of the space intend to open the restaurant sometime in April.