Buchanan a finalist once again for the ‘Battle of the Fans’ 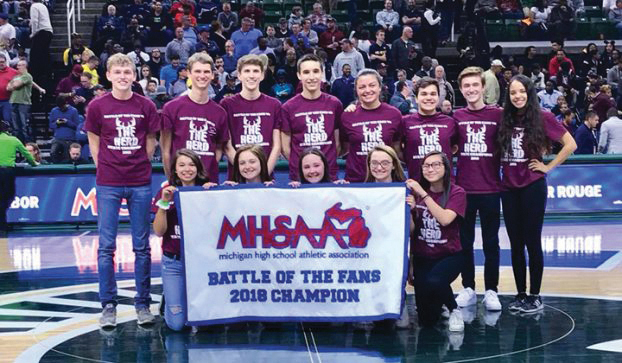 Buchanan has once again reached the finals of the “Battle of the Fans.” (Leader file photo)

EAST LANSING — Two past champions and a first-time applicant have earned opportunities to vie for the Michigan High School Athletic Association’s “Battle of the Fans X” championship recognizing the top high school student cheering section in Michigan, as awarded by the MHSAA’s Student Advisory Council.

Buchanan, Midland Dow and Traverse City West were selected as finalists by the Advisory Council from a group of nine semifinalists that took part in a series of challenges highlighting their sections over the last two weeks.

The winner will be selected by another vote by the 16-member Advisory Council, with consideration given to a public vote on the MHSAA’s social media channels. This year’s winner will be announced Feb. 18 and recognized March 25 during the Boys Basketball Semifinals at the Breslin Center in East Lansing.

Buchanan is a three-time BOTF champ (2013, 2018 and 2020) and has reached the final round for the fourth straight competition. Traverse City West was the winner in 2016 and has been a semifinalist seven times since 2014. Midland Dow entered the competition this school year for the first time.

The MHSAA will visit the finalists for the following home boys basketball games (unless noted):

Howell, North Muskegon and Spring Lake filled out the next three spots, while Imlay City, Petersburg Summerfield and Yale also were semifinalists.

“After the pandemic canceled the competition in 2021, it’s no surprise that two schools with rich student section histories made the final three this year,” said Andy Frushour, the MHSAA’s director of brand management and advisor to the Student Advisory Council. “The Herd from Buchanan and the Bleacher Creatures at Traverse City West have to be considered the favorites going into the final round. They have been in this position many times, winning four of the nine championships, but don’t sleep on Midland Dow. We could tell right away this first-time challenger would be a contender, and this section has been strong all year long.”

Battle of the Fans is organized by MHSAA staff and the Student Advisory Council. Schools were invited throughout the fall to submit short videos, via TikTok, of their cheering sections in action. The Advisory Council then selected nine semifinalists to accomplish a list of tasks showing off their sections over a 12-day span.

Semifinalists were required to complete five mandatory challenges, and up to a total of 20, and highlight them in a three-minute TikTok. The mandatory challenges focused on contest criteria: positive sportsmanship, student body participation, school spirit, originality of cheers, organization of the group, student section leadership and overall fun. Descriptions of all 20 challenges are available on the MHSAA website at bit.ly/3rJmQPl.

A total of 27 schools applied for this year’s contest, tying for the most ever. Three semifinalists were selected from each of the Class A, Class B and Class C/D applicants. To view all applications on TikTok, visit bit.ly/3nS36rE.

The contest is sponsored in part by the United Dairy Industry of Michigan, which promotes Michigan’s locally-produced dairy products and nutrition education.