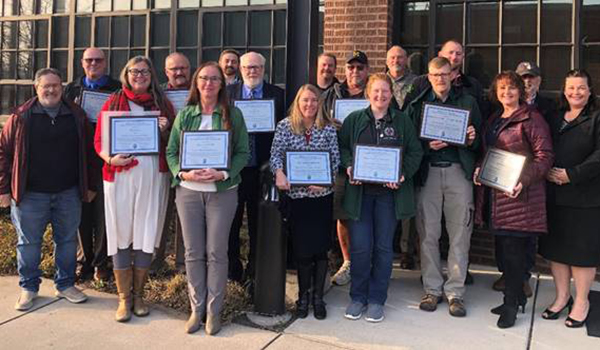 The award is presented annually for projects that exemplify cooperation between and among governments, non-profits, and private entities.  It was established to recognize and reward the partners who execute complex, regional problem-solving that optimizes the use of limited resources.  The partners involved were deemed deserving for their resourcefulness, dedication, and persistence. The 2021 Graham Woodhouse award was given to project partners that included five units of government, two state departments, one federal agency, four consulting professionals, three private foundations and one special interest collaborative.

The ambitious project involved 19 miles of Dowagiac River Water Trail, the removal of Pucker Street Dam and the Restoration of two miles of the Dowagiac River. The Dowagiac River is the largest cold-water trout stream in southern-lower Michigan. It is a spectacular salmon and trout fishery visited by anglers from across the Midwest.

In 2013, the city of Niles began working with partners to remove the dam and restore up to two miles of high-gradient river upstream.  The dam (38 feet high) and its powerhouse were extremely large structures containing hazardous materials.  The dam also blocked fish passage to over 159 miles of river upstream.  The dam removal planning and permitting took seven years, with demolition starting in August of 2019 and ending at the end of 2021.

With the removal of the dam, the 19-mile Dowagiac River Water Trail became possible, allowing for recreation development including a new kayak launch at Dodd Park, a new river access site at Peavine Street, and a park at the dam location for kayakers and anglers.

The partners worked together throughout the nine-year process and many have developed a better understanding and appreciation for the Dowagiac River. For the last four years, there have been bi-weekly meetings to ensure coordination and to navigate through the many obstacles encountered.