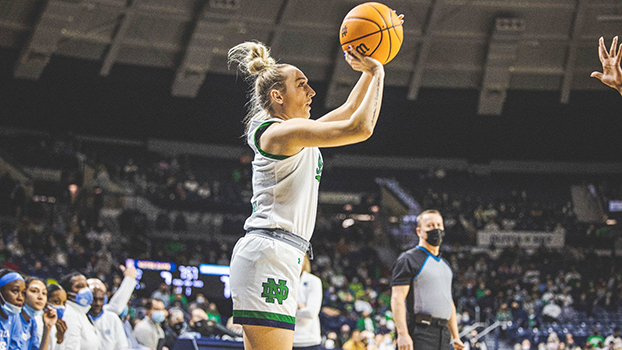 NOTRE DAME, Ind. — For the first time since Dec. 19, the No. 20-ranked Notre Dame women’s basketball team was back inside Purcell Pavilion, as the lively crowd on Sunday powered the Fighting Irish to a 70-65 win over the No. 21-ranked North Carolina Tar Heels.

Dara Mabrey continued her stellar week by achieving yet another season high, this time for 24 points. The senior connected on a season-high six made three-pointers. With the wins over Wake and North Carolina (14-2, 4-2), Mabrey totaled 46 points on the week.

Both Sonia Citron (12 points, 10 rebounds) and Maya Dodson (10 points, 11 rebounds) achieved double-doubles, as the duo were critical on the glass. Dodson was also huge defensively, racking up four blocks.

Maddy Westbeld got back into double figures with 11 points, including a clutch bucket with 2:43 remaining in the game. Point guard Olivia Miles stuffed the stat sheet with seven points, eight assists and six boards. Mabrey, Miles and Anaya Peoples all collected three steals each.

It was also a day the program honored its past by donning special Trena Keys-inspired shooting shirts in pregame. Keys was the first black student-athlete to earn a scholarship with the program back in 1982.

It was not an ideal start for the Irish, coughing the ball up six times in the opening period, while shooting 1-for-7 from two-point range. However, the three-ball kept Notre Dame in striking distance, as Citron went 2-for-2 while Mabrey tacked on a third. Citron notched eight points in the first, but picked up her second foul with a few seconds remaining in the quarter. Said foul resulted in a four-point play for the Tar Heels, pushing their lead to 22-15.

Later down 30-21 midway through the second (North Carolina’s largest lead of the contest), Mabrey and Miles combined for a swift 7-0 run in a 67-second span. However, shortly after at 3:39, Miles picked up foul No. 3 and joined Citron on the already shortened bench.

Yet, the Irish garnered some momentum right before half as Westbeld tacked on a field goal at the buzzer, pulling the Irish within one, down 34-33, at the break.

The halftime adjustments paid off for Notre Dame, as they allowed just one UNC field goal for a five-and-a-half-minute span. In the meantime, the Irish got hot and recorded a 17-2 scoring spree. Mabrey, Dodson, Miles, Westbeld and Brunelle all got in on the action and recorded baskets during the run. Next, Mabrey’s fifth three of the game with 18 seconds remaining in the third put the home team up 54-48.

Dodson caused a loud crowd eruption at 7:08 in the fourth, after sprinting the length of the court to chase down Utsby and record a huge block. Mabrey hit her sixth and final three at 7:42. In addition, Mabrey, Dodson and Citron all provided critical free throws down the stretch to seal the big ranked victory.

The home stint was short lived for the Fighting Irish begin yet another road tour, three straight games away from Purcell to be exact. Up first, Notre Dame will travel to Boston College on Thursday, Jan. 20. Tip is set for 6 p.m.