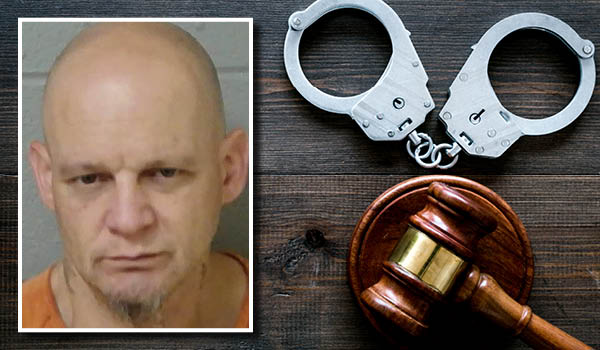 CASSOPOLIS – A Marcellus man is going to prison after being sentenced Friday in Cass County Circuit Court for an incident last May near Cassopolis.

Coy Eugene Brown, 45, of Marcellus, pleaded guilty to possession of meth, possession of a firearm by a felon and use of a firearm in the commission of a felony and was sentenced to credit for 248 days served on the first two charges and to two years in prison on the last charge of felony firearm. He must pay fines and costs of $2,184.

He also pleaded guilty to being a prisoner in possession of a weapon and was sentenced to credit for 176 days served and $698 in fines and costs.

The first incident occurred May 11, 2021, when he was stopped at Russ Forest on Marcellus Highway near Cassopolis. A woman reported she had been robbed at gunpoint and Brown matched the description of the robber and was found at the park in his car. A search of his car found weapons, ammunition and drugs.

The second incident occurred July 23, 2021, when he was found to be in possession of a shaved down piece of metal at the Cass County Jail. The piece of metal was found inside a Bible in his cell.

“This could have a lot worse,” said Cass Assistant Prosecutor DeVante McCollom. “Whenever you mix drugs and firearms, violence often ensues. He has been using meth since his 20s, and hopefully, he will have a better life once he is released. It’s up to him to seek help and make changes in his life. We hope we never see him here again.”

Defense attorney Greg Feldman said his client has had a chance to reflect on his life and wants to change its trajectory in the second half of his life.

“He is an intelligent person. if he applies himself to learning a different path, he can come out a much better person,” he said.

“I’ve learned a great deal being here [in jail],” he said. “I realize that my drug addiction has been a downward spiral. I want to be a clean and better person so I can be more helpful for other people.”

Cass County Circuit Judge Mark Herman said he hope Brown is serious about changing. He noted that any subsequent felony conviction will likely result in him serving a “long, long prison sentence.”

“You’re still young enough to have a good long life if you make some changes,” the judge said. “But appreciate where you’re at. If you don’t give up drugs, you’ll likely spend the bulk of the rest of your life in prison.”