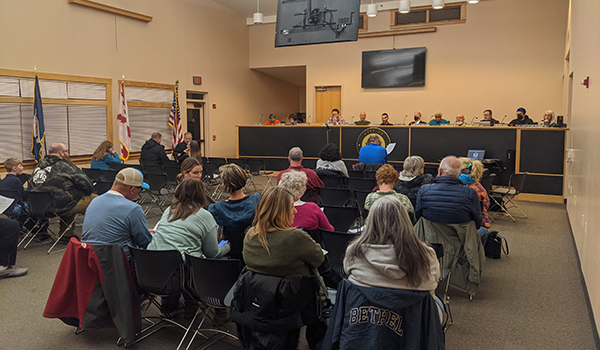 NILES — Niles city officials got a chance this week to learn more about how their outdoor spaces are making an impact.

At this week’s Niles City Council meeting, Michigan Economic Development Corporation certified planner Christopher Germaine was on hand to give the council a presentation on the impact outdoor spaces — such as the Niles Outdoor Dining Experience — are having on communities across the state.

A social district is a designated area where food and legally purchased alcoholic beverages can be enjoyed. An outdoor space refers to specific public areas within the social district, created by the municipality, that are not linked to a specific business where people can enjoy legal drinks together.

In September 2021, Niles was one of two municipalities in the state chosen by the MEDC for a new winter strategies pilot program aimed at turning winter economic development and recreation ideas into action, the other city being Mount Pleasant. The pilot program will build off of a winter strategies guide for downtowns and business districts that was released last year. The guide provides strategies for downtowns to drive foot traffic, maximize community assets and promote economic vitality during the winter months.

According to Germaine, communities statewide are creating outdoor social districts in their downtowns, closing off sections of streets that allow residents and visitors to walk downtown and enjoy the scene.

Thanks to changes in regulations in response to the pandemic, social districts are helping to spur additional economic growth and engagement in their communities, Germaine reported. He said there are currently 78 social districts in Michigan, and the number continues to rise.

The presentation was timely as the city weighs its options regarding the NODE, which is currently set to expire May 1. While not opposed to the concept of the NODE, Fourth Ward City Council Member John DiCostanzo was vocal Monday regarding his desire to see the space removed or relocated from its position on Second Street in downtown Niles. He said he is unsure whether or not Niles is ready to embrace a shift toward outdoor public spaces.

“I grew up in the New York metropolitan area. People go to Manhattan, and they expect to walk,” he said. “They expect to see paid parking lots and have to walk. I’ve been to the outdoor space in Grand Rapids, which is another city where you’re just not going to find convenient parking. You’ve gotta park in a big public parking lot, and you’re going to expect to walk, and we’ve got a culture here in Niles where folks want to be able to park near where they’re at. We want to park right next to the venues, and I just don’t know how we make that transition to get people accustomed to parking in a parking lot and walking three blocks to where they’re going.”

As part of MEDC’s work with the city on its Winter Cities Strategy Work Plan, an online survey was conducted to gather impressions of the NiODE. Draft plans are still in the works but initial data showed that out of 567 responses:

“Almost 600 responses to an online survey is actually incredible,” Germaine said. “Statistically speaking, it’s actually really good. You have to determine the demographics, and if it is truly representative of the community, and that’s why we don’t really count them because we don’t have data to back that up. … I will encourage you to consider making that investment and going with a professional who would be able to give you the data you need. It’s not easy to get, but if you’re willing to invest in it, you can get it.”

Based on the results of the online survey, the MEDC determined that the NODE seems to enjoy significant support in concept, though its current location in the road does bring a noticeable number of detractors.

“The Winter Strategies Plan focused on what existed at the time, so the recommendations that’ll come out of that strategy will apply to the NODE, no matter where it’s at, whether it’s here or somewhere else,” he said. “The strategy does talk about some additional improvement down by the river that is separate from the NODE in the strategies concepts. The second draft is being reviewed right now.”

Several members of the community attended both Monday’s city council meeting and the MEDC presentation, including Stephanie Reno, owner of SLR Pilates and co-owner of Trap House 24 SLR. Reno believes that work needs to be done to bolster downtown Niles before moving forward with outdoor spaces.

“We have some wonderful places down here,” she said. “We’re skipping steps, and it’s detrimental to us. It’s common sense to me where I’m going. Why are we missing this? If we did it one building at a time, one business at a time, before you know it, we could support all of this stuff, and it could be a phenomenal downtown.”