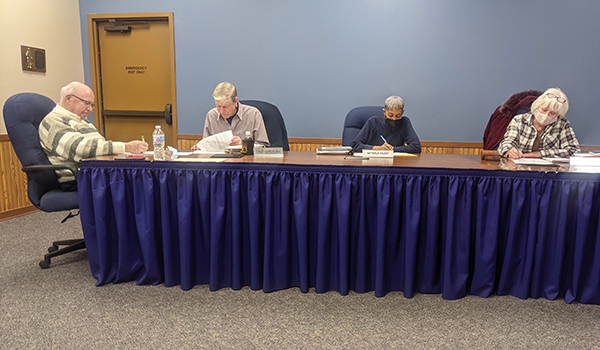 The meeting featured a discussion about zoning ordinance updates and the township’s groundwork for its master plan draft.

According to Hartman, the planning commission is looking to update the wording of the ordinances to prevent confusion.

Corner lots are considered to have two front yards, consisting of the main front yard — where the address is located — and the side street yard. For medium-density residential housing (row houses, townhomes, etc), a setback for an accessory structure like a shed is 60 feet from the road right of way.

“Some of those lots, if you use the side yard, are only 60 feet [from the right of way],” said zoning administrator Denise Kasprzak. “It doesn’t allow them without applying for a variance to place a shed as well as have a 6-foot fence surrounding that yard. I think that we can come up with a solution … and determine which yard on a corner lot is the front yard. If you have an acre, it’s not going to be a big deal, but if you have a 60 by 100-foot lot, it’s a very big deal.”

According to Kasprzak, several property owners may not be compliant with these ordinances due to the confusing wording of said ordinances.

“It’s a major issue because we’ve had people that are in violation right now,” Kasprzak said. “When you look around, it could have been that way for years. The problem with that is that anything that was built by previous ordinance standards would be allowed to continue as a non-conforming use. We don’t have the records that go back far enough that would make it possible for anyone to identify those that may be illegal, and to be honest, I don’t think it is worth the time and effort to figure it out.”

Hartman said changes to the ordinance require that the planning commission make the recommendations for the changes to be made and hold the public hearing so that the public would be invited for feedback on those specific changes. The process would take a minimum of 90 days, according to Hartman.

“It’s not something we have the authority to do as a commission,” she said. “We put it before the public to get their feedback, fine-tune it based on their feedback and then once we have something concrete, we send it to the board of trustees for their approval. … I’m not looking at anything actually getting changed until probably sometime this summer.”

After discussing ordinances, the commission moved on to the topic of the township’s master plan. Hartman said the planning commission’s October joint meeting with the board of trustees was a success, with the two entities discussing community-wide goals, the potential for economic growth, infrastructure, alternative forms of energy and future land use.

The planning commission will prepare a public notice for its master plan update, which Hartman hopes to host in February.

“We invite public comment and participation as we move forward with this process,” Hartman said.