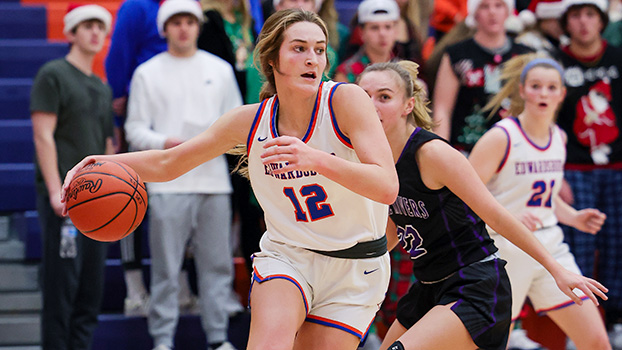 Edwardsburg, which entered the game 6-0 and the leader in the South Division, was able to turn a two-point lead after one quarter of play into a 20-point victory over No. 2-ranked Otsego, which was 9-0 heading into the contest and the leader of the North Division.

“We started rebounding and stopped giving up easy second-chance points,” he said.

Edwardsburg, which has just eight players on its roster, outscored the Bulldogs 14-10 in the second quarter to open up a 27-21 halftime advantage. It was all Eddies in the final 16 minutes of the contest.

Edwardsburg increased its lead to 11 points, 40-29, by the end of the third quarter, and then outscored Otsego 12-3 in the final eight minutes to turn the game into a rout.

Despite a shortage of numbers, Poduda said his team can play the style of basketball it wants to by being dedicated.

“Our girls work hard in practice, which has helped them stay fresh in the games,” he said. “We also try to lift twice a week.”

The Eddies are pleased to come away with a victory over the Bulldogs in what could be a preview of the Wolverine Conference championship game next month, but they also know there is more work to do before reaching their aspirations for the season.

“This win puts us in a good position to accomplish some of our goals,” Pobuda said. “We still have a lot to prove, but this was a good win against a very good team.”