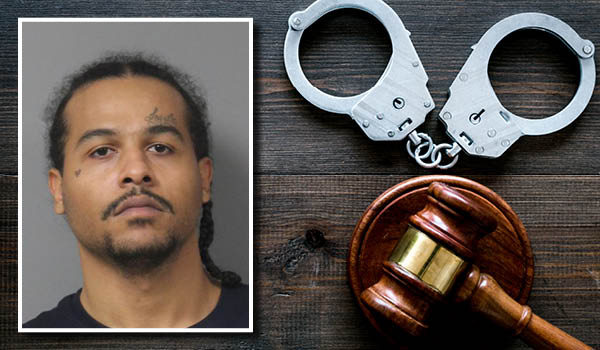 Terrell Denzel Barrett, 25, of South Bend, pleaded guilty to possession of cocaine and carrying a concealed weapon in an auto and was sentenced to credit for 59 days already served and two years’ probation on the cocaine charge. He must pay $658 in fines and costs and forfeit his weapon.

“He is in a position here where he can still turn things around,” Briseno said. “This is the fourth time he has been charged with a crime and he has a pending case in Indiana. He’s got some good community support behind him and I think he can be successful on probation.”

“Why are you running around with drugs and guns?” Judge Schrock asked Barrett.

“I know what I did was wrong, and I shouldn’t have done it,” Barrett replied. “I want to turn my life around.”

“That doesn’t answer my question, why are you running around with drugs and guns in your car?” the judge asked again.

“Because I’m a loser,” was the reply from Barrett.

“I’m not asking you to belittle yourself,” the judge said. “Either you’re a drug dealer or trying to protect yourself. You’re running around with a gun, what does it make you look like, a drug dealer? Why did you do it?”

“My concern is and why I ask questions is that you’re a young guy starting off with two felony convictions,” the judge added. “You’re kind of at a turning point. You can flip around and have success in life or you can go through the revolving door of the criminal justice system.”

In the other probation case, Diana Lynn Vite, of Buchanan, pleaded guilty to possession of meth and was sentenced to two years’ probation, 45 days in jail with credit for two days served and $258 in fines and costs. She can serve the remainder of her jail sentence in the Twin County Probation Program.

She also pleaded guilty to violating an earlier misdemeanor probation and was sentenced to credit for 21 days served and revocation of that probation from an August 2021 conviction for use of meth.

The most recent incident occurred Oct. 10 in Niles.

Briseno asked for the new probation sentence so that Vite can be monitored and get the help she needs to overcome her drug addiction.

“I think probation is a great way for her to be monitored and make sure she’s receiving the necessary treatment and necessary tools she needs to prevent this in the future,” she said.

Judge Schrock questioned Vite for going back to using meth just a few months after being sentenced in August.

“I gave you the opportunity to get yourself straightened around, and you went out and used meth again,” he said.

“What did you do to try to get yourself back on track?” he asked. “You weren’t doing well on rehab if you went back and used. You did rehab and then you came back out and repeated the behavior. … It’s clear you need a more intense, broader ranged program.”