SMC’s Davis hitting the gyms in search of area talent 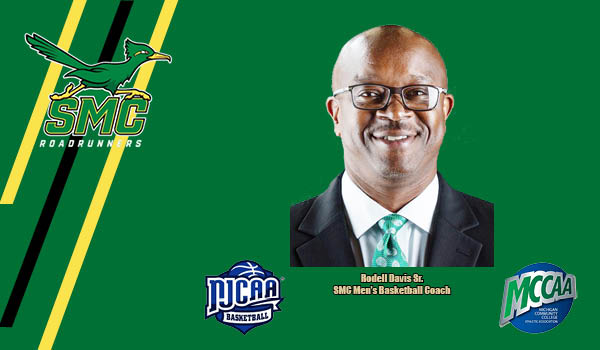 DOWAGIAC — New Southwestern Michigan College Men’s Basketball Coach Rodell Davis Sr. can be found most Tuesday and Friday nights in an area gym seeking talent for the Roadrunners, who are scheduled to bring back the sport in the winter of 2022.

Davis, who is also SMC’s athletic director, has been looking to put together a team that can be competitive right off the bat, much like the Roadrunner cross country teams were this past fall when the college revived that sports after 25 years.

A native of Dixmoor, Illinois, SMC’s new AD played Division I basketball for Dr. Tom Davis at the University of Iowa, where he earned his bachelor’s degree in 1992. While Davis was an assistant coach at Drake University, the Bulldogs finished 28-5, winning the Missouri Valley Conference regular-season and tournament championships and finishing #14 in the final Associated Press poll.

While an assistant at Providence College in the Big East Conference, Davis helped coach the Friars to an upset win over No. 1 Pittsburgh and set the school record for wins (19) by a first-year staff. Davis also served as an assistant coach on Porter Moser’s staff at Loyola University-Chicago.

Davis has more than 10 years of experience coaching and leading at the junior college level. He was head coach/athletic director from 2003 to 2007 at Laramie County Community College in Wyoming, winning the Region IX Central Championship in 2006. He also served as athletic director at Kennedy-King College in Chicago for six years, reaching the Region IV Championship game in 2015.

From 2016 to 2018, concurrently with his responsibilities at Kennedy-King College, Davis was an assistant coach at Morgan Park High School, helping that team win two Illinois High School Association 3A Championships. All 10 seniors on the 2018 team received athletic scholarships and five of them went on to play at the Division I level. Most recently, Davis served as associate head coach at Chicago State University, a member of the NCAA’s Western Athletic Conference.

“The recruiting process has gone really well,” Davis said. “The one thing I am extremely appreciative of here is that the administration did not hire us in August and expect us to play in November, so we can be a little more selective in who we take and take time to evaluate people. That way we won’t miss on people so to say.”

Davis plans to hit the southwest Michigan teams hard and then to fan out to include northern Indiana and areas like Kalamazoo.

“As we go out and recruit, we want three things,” he said. “No. 1, we want good people. We want people who will represent us well both on and off the court. No. 2, we need willing students. We need people who are going to get up and go to class. They do not have to be straight-A students, but they have to want to get a degree. We can use the resources we have here on campus to help them achieve that goal. And then obviously, No. 3, they have to be able to play.”

Davis has already hit more than 20 gyms in the state of Michigan, either to watch teams practice or attend games that were held before the Christmas break. He has also hit gyms in Indiana and northern Illinois.

“We want to do the same thing that any local school is going to do,” he said. “You want to recruit your area as hard as you can, and the athletes who are good enough to play here basketball-wise, we want to keep them here. Then we can branch out to the state. We can branch out in the region. We want to find the players who are going to be great fits.”