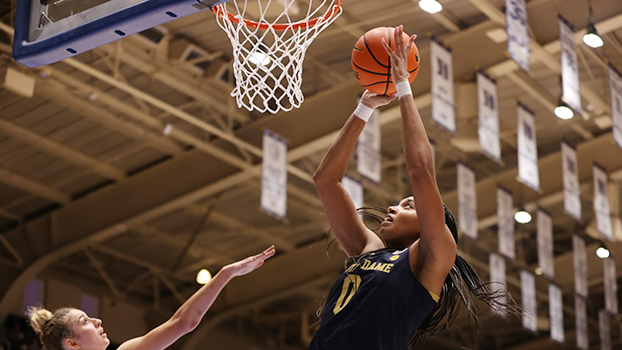 DURHAM, N.C. — Down two with under 20 seconds to play, the No. 17 Notre Dame women’s basketball team had three attempts in the paint to hit the equalizer against No. 15 Duke, but none of the shots would fall, as the Blue Devils pulled off a late rally to escape with a 72-70 victory.

18) to register back-to-back games with 25 or more points.

Basketball is a game of runs and this very game exemplified that. Duke fired off a quick 7-0 run in the opening minutes as Notre Dame found itself in an early 10-4 hole. Sam Brunelle registered two of the next three baskets to spur the Irish offense. Later Citron scored five of the team’s last seven points in the quarter, including a deep buzzer-beating three which gave the Irish a 19-16 lead.

Duke’s Elizabeth Balogun started the second quarter with back-to-back treys, but the Irish responded with an 8-0 run over an 80-second span, claiming a 27-22 lead. Duke fired back with seven straight points from 4:21-3:08, only for the Irish to punch back with a 7-0 run themselves to go up 38-33.

The Irish ultimately took a 40-37 lead into the break as both teams shot just over 55 percent in the half. Maya Dodson led at the half with 12 points, followed by 11 from Miles and nine from Citron.

Peoples and Dodson combined for a quick six points to jumpstart the second half and build Notre Dame’s lead to 46-37 at 8:04. However, Duke rallied with a 11-0 scoring run which prompted a Coach Ivey timeout, now down 48-46 at 4:31. Dodson’ 18th point of the contest got the Irish back on track and ended the four-minute drought.

Enter Dara Mabrey, who took over in the final two minutes of the third. The senior scored seven straight points, kicking it off with a momentous three-pointer, and even took a charge down on the defensive end. As a result, Notre Dame took a 55-48 lead into the fourth.

However, that is when Duke got hit, ultimately hitting 10-of-16 in the quarter. Duke’s Balogun and Miela Goodchild combined for 16 of the team’s 24 points. The Irish had a 70-68 lead with 90 seconds remaining, but Balogun had the final four points of the contest. With 15.5 seconds on the clock, the Irish were able to get three attempts off, but none would fall.

The Irish head home and have a week to prepare for No. 5 NC State. That contest is scheduled for 2 p.m. Sunday, airing live on ACC Network.