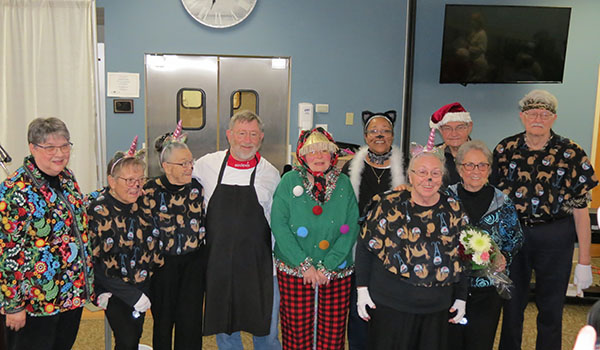 CASSOPOLIS — Members of a local organization injected some Christmas cheer into the community with a special performance over the weekend.

With dozens in attendance at the Lowe Center in Cassopolis on Saturday, members of the Cass County Council on Aging Friday Sing-A-Long group performed their interpretation of “The Thirteenth Cookie.”

The play, adapted by Sing-A-Long group member Janette Rafferty, is a story about a baker who – along with his cat – runs a bakery business. When an old woman comes in asking for 13 cookies in her order of a dozen, the baker refuses and the two engage in a war of words. Eventually, the baker concedes, learns a lesson about giving and the term “Baker’s Dozen” is coined.

According to Rafferty, the adaptation did not quite stick to the original script, and included songs such as “Santa Claus is Coming to Town,” “White Christmas,” “My Two Front Teeth” and “This Old Bakery’s Falling Down,” which was sung to the tune of “London Bridge is Falling Down.”

“The premise was the same, but we just kind of screwed it up,” she said. “I think it was funny – everybody laughed. It went very well.”

The original play was set in 1600s New York, but Rafferty’s adaptation localized it to a Cassopolis bakery. She said it was difficult to organize with everybody on different schedules, but everyone agreed it was a lot of fun to rehearse and perform.

According to John Bradke, who played baker John Dough, the adaptation went through many changes that kept the cast on their toes.

“One day we’d have it all set and then ‘oh my gosh, we’re going to change this,’” he said. “Practices were fun. We got to know our characters quite well, and we had fun singing and just getting something to do, especially during this pandemic. … It seemed like it worked pretty well.”

The performance featured multiple instances of crowd participation, including Sassy the Cat asking the audience for toy mice that were passed out.