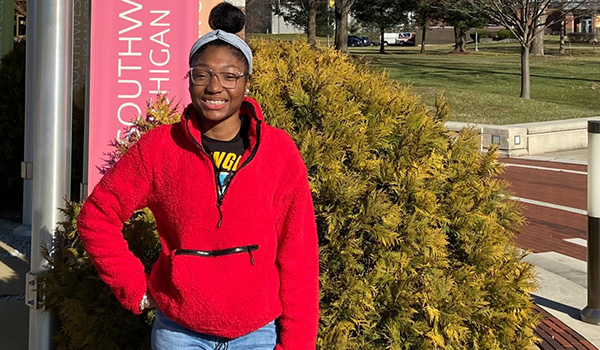 DOWAGIAC — Southwestern Michigan College announced this week a $7,500 gift from the AEP Foundation, on behalf of Indiana Michigan Power, will fund the first year of scholarships and expenses for the Grady Scholars leadership-development program.

The scholarships are named for George Grady (1933-1977), a Dowagiac resident, Navy diver and Korean War veteran who served as Michigan’s first African American police chief for nine years from 1965 through 1974.

“We truly appreciate the support of the AEP Foundation and Indiana Michigan Power to establish Grady Scholars,” said Dr. Joe Odenwald, President of Southwestern Michigan College. “This type of effort is sorely needed in our community to improve college attainment and help all families train for better careers.”

Founded in November 2020, the competitive Grady Scholars program gives first priority to in-district graduating high school seniors who are historically underrepresented in college. Goals for the program include developing students’ leadership abilities, helping those students become RAs and orientation leaders and building upon SMC’s other student leadership initiatives. With a greater diversity experience in student leadership, prospective students coming to the campus will better identify with students serving in those areas, and current students will be more likely to complete their education, leading to more opportunities and higher lifetime earnings.

“We’re pleased to help the first class of Grady Scholars get started on their college education,” said Mona Livingston, community affairs manager for Indiana Michigan Power. “This initiative aligns really well with the mission of the AEP Foundation and it was evident from talking with Dr. Odenwald that he cares deeply about the Southwest Michigan area and SMC’s role in helping to build for the future.”

The first class of six Grady Scholars started at SMC in September.

“There are people within the college district who still think SMC is out of their reach. We know that’s true because we still have about 46 percent of high school students graduating in the Lewis Cass ISD who aren’t attending college anywhere,” said President Dr. Joe Odenwald. “The idea is to associate this new program with someone from our area who was a trailblazer, and by all accounts, George Grady was.”

Classie Newbern, biology/medical pre-professional major, said that the program has been beneficial for her.

“Being in the Grady Scholarship Program didn’t just help me out financially, it has helped me gain more leadership skills and showed me what being a leader is all about,” she said.

“The one-on-one mentoring I received through the Grady Scholarship Program was really helpful for me. During our academic sessions, I learned many leadership skills, including the values, attributes, and responsibilities of being a successful leader,” added business major Alexander Medina. “I know this program provided me with a good baseline to set my goals for the semester of getting good grades, making new friends, and participating in student activities on campus, and I accomplished the majority of those goals this semester.”