Dowagiac teachers issue vote of no confidence in superintendent, walk out of board meeting 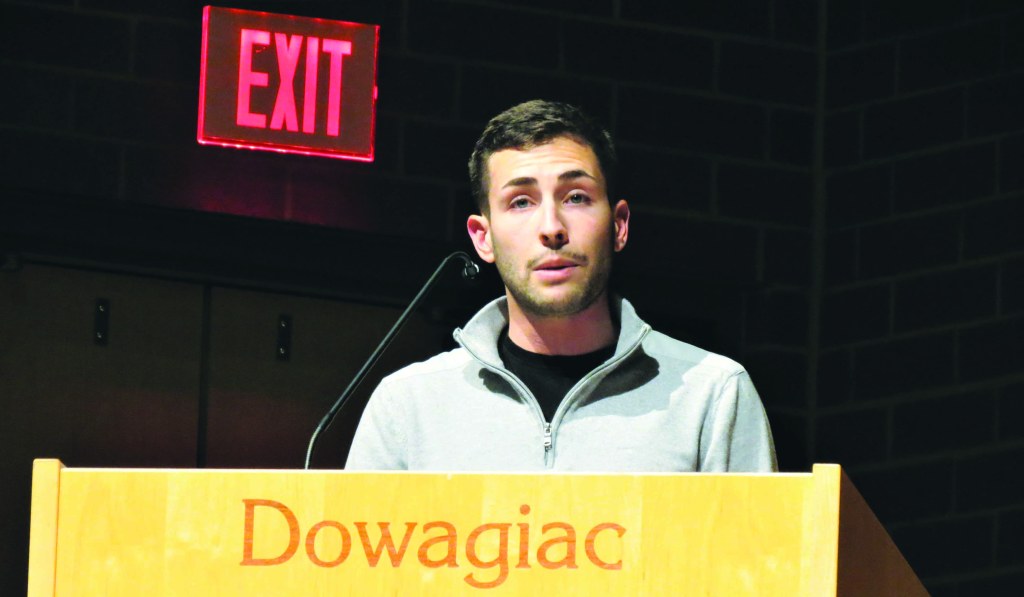 DOWAGIAC — The battle between Dowagiac teachers and the district school board is showing no signs of slowing down.

During the monthly Dowagiac Union School Board meeting Monday, the Dowagiac Education Association issued a letter to the board informing them they have approved a vote of no confidence in district administration, specifically Superintendent Jonathan Whan.

“We do not believe that the superintendent has acted in the best interests of students, staff or the community at large,” said DEA President and DUHS teacher Matt Nicholls, reading from the letter. “[We] request board action to determine the best course of action to rectify the many problems within our district.”

According to district leadership, about 30 teachers have left the district since Jan. 1. At Monday’s meeting, it was announced that English teacher Amber Wiltshire also is resigning.

“The climate and culture of the district has suffered immensely under the current leadership,” the DEA letter said. “[Leadership] has offered no help, assistance or support to teachers that have been pushed to the brink over this past year.”

Director of Bands Shane Oakley, who is resigning effective after Dec. 17, said during public comment there are many reasons he is leaving the district.

“Since Jonathan has been superintendent, I have watched the support for my program been scaled back year after year,” he said. “There’s a complete lack of support, communication, respect and recognition for us as teachers and for the programs that we worked so hard to operate.”

Oakley said he has been teaching a class of 35 sixth-grade band students, and is unable to meet their needs due to the class size. He has asked for an assistant, which many schools offer.

“Not only have I not received an assistant, it was never communicated to me as to why we are not hiring one – a complete lack of respect for what I do,” he said.

Oakley said when he resigned, he was never asked why, just sent a survey asking him to summarize his time in the district.

“I felt completely replaceable,” he said. “People keep asking me, what are you doing when you’re done here next week? My answer is ‘I don’t know,’ … but what I do know is I will not work for this district anymore.”

Whan said it is disappointing to hear those types of statements.

“Unfortunately, in this world today, when you’re in these positions and you’re the head of organizations, there are times you will be challenged,” he said. “We take it and we do our best to continue to grow and improve.”

Teachers and the district remain in contract negotiations, which have been ongoing for months. According to Whan, negotiators for the district and Dowagiac Education Association had a tentative agreement at the end of September for a two-year contract, but when the proposal went to the teachers for a vote Oct. 8, it was turned down.

The district published terms of the tentative agreement to the Dowagiac Schools website in a statement issued Dec. 1.

“After a review and evaluation of the DEA’s list of concerns, the Board’s formal bargaining position is still represented by the attached Tentative Agreement (TA) which provided for significant increases in compensation over two years,” the statement said. “Based on questions raised, the Board’s team believes that the Tentative Agreement’s proposed increases have not been clearly communicated or understood.”

The document lists an average salary increase of $6,191, or 12.85 percent, spread out over two years. The number includes a $1,200 off-schedule payment.

“Those are not true numbers – it’s an average that you can go through and break down,” he said. “It’s negotiating in public, which is inappropriate. … This is their spin on what was offered.”

After the meeting, Whan said the board felt the need to post the document because to provide “a clearer understanding” of the financial perspective of the negotiations, but disagreed that it constituted negotiating in public.

Board President Ronda Sullivan also prepared a statement to clarify the board position, which she read at the end of the meeting.

“The board’s goal is to ratify an agreement that recognizes the interests of all stakeholders that have contacted us – including teachers – that ensures the continued financial security … and that advances our mission to educate our children,” she said. “The board hears you.”

As soon as Sullivan said, “the board hears you,” one teacher shouted “you do not,” another shouted “liar,” and most teachers in attendance stood up and left as Sullivan continued her statement.

“We are listening. We are committed to making positive change,” she said. “We have some things that we have to work through and that’s going to take everyone. We are aware that this is serious and it’s a serious time and we will work for change. The positive of this is, we know with the people sitting here, we have a lot of people who care. On behalf of the board, we thank you.”