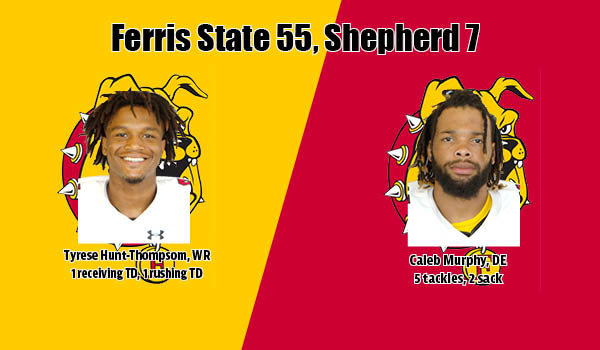 BIG RAPIDS — For the second time in three years, the Ferris State University football squad is headed to the NCAA Division II National Championship game as the Bulldogs rolled to a decisive 55-7 win over Shepherd in the national semifinals at Top Taggart Field Saturday.

With the win, the 12-0 Bulldogs will now square off against Valdosta State (Georgia) in the national title game Saturday, at the McKinney ISD Stadium in McKinney, Texas. Kickoff is set for 9 p.m., with live television coverage on ESPNU.

The Bulldogs bolted in front early as senior quarterback Jared Bernhardt returned to the FSU lineup and ran for five first-half touchdowns in the dominating win. He scored on FSU’s opening drive, carrying the ball twice for 66 yards on the two-play march, and capped the drive with a five-yard scoring run only 95 seconds into the game.

The visiting Rams took advantage of a Bulldog turnover and knotted the game up at seven midway through the first quarter when Harlon Hill Trophy candidate Tyson Bagent threw a one-yard scoring pass to Josh Gontarek to finish a drive covering 46 yards.

From that point forward, though, it was all Bulldogs as the offense continued to hit its stride and the defense settled in and held the Rams off the scoreboard the rest of the way.

Bernhardt scored twice more in the first quarter on a pair of one-yard runs and added two touchdowns on the ground in the second with carries of seven and 15 yards. His last score came only 2:39 before halftime and gave the Bulldogs a commanding 35-7 lead at intermission.

In the third quarter, the Bulldogs pushed the margin to 48-7 as Tyrese Hunt-Thompson, of Cassopolis, scored a pair of touchdowns. His first came on a 16-yard carry with four minutes remaining in the period and the second was a 15-yard reception from quarterback Mylik Mitchell in the final minute of the stanza.

The Bulldogs would later score the only points of the fourth period when quarterback Evan Cummins finished a 12-play, 75-yard drive with a seven-yard scoring run with 7:12 to play.

Bernhardt ran for a game-high 201 yards on the ground and completed seven-of-11 throws for 51 yards. Slot receiver C.J. Jefferson added 83 yards rushing on four carries and caught a team-high three passes for 24 yards.

FSU limited Bagent to a 22-of-46 passing performance and the standout threw for 249 yards, but was sacked three times and intercepted once by the FSU defense.

Overall, the Bulldogs totaled 560 yards offensively and limited Shepherd to 299 yards in the first-ever matchup between the two schools.

The Bulldog defense was led by senior linebacker Liam Daly, who finished with nine tackles. Sophomore defensive end Caleb Murphy added five stops along with a pair of sacks and tackles for loss in the triumph.

The victory was the 100th for FSU head coach Tony Annese at the Bulldog helm in nine seasons.

The Bulldogs were making their fifth-ever national semifinal appearance and will now advance to the national title game to face Valdosta State in a rematch of the 2018 championship game won by the Blazers, 49-47, in McKinney.

For additional information on the Bulldogs’ trip to the national championship game, please stay tuned to FerrisStateBulldogs.com/Texas.

Boys roundup: Dowagiac, Niles and Edwardsburg all pick up…