Boys roundup: Dowagiac, Niles and Edwardsburg all pick up wins 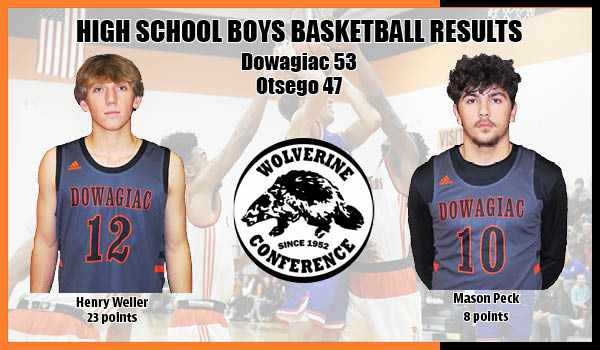 With the game tied at 39-39, Dowagiac outscored Otsego 14-8 in the fourth quarter to put out the victory.

“It was a big road win and a nice way to start the season,” said Dowagiac Coach Danum Hunt. “It is a confidence builder going into the season. Last year we were down, but with all the guys we have coming back, they have more experience, and they are stronger. They are eager to get out there and play.”

Hunt said is players are dubbing this season the “Redemption Season.”

“They want to redeem themselves from the poor play last season even though we had COVID going and players out. They think this year they have something to prove. They went out and played really hard tonight.”

In previous meetings against the Bulldogs, Otsego has been able to take charge of the game early and then cruise to the victory. That was not the case Friday night. Dowagiac kept the game close in the opening quarter and then forced the tie by halftime. Hunt said that was key to the final outcome.

“That was really huge,” he said. “To be tied up going into the half, even with them scoring on a little put-back at the buzzer, that gave the kids life and energy for the second half.”

Hunt said that getting the early lead in the fourth set the tone.

“We knew it was important to stay on top,” he said. “We were able to go out there and jump out to a lead. We tried to give it back with some late turnovers, but we were able to recover.”

Henry Weller, who led southwest Michigan in scoring last season, poured in a game-high 23 points to lead the Chieftains, who also got eight points from Cole Weller, Mason Peck and Jordan Hardin.

ALLEGAN — Visiting Edwardsburg bounced back from its season-opening setback against Marshall to post an easy 74-28 win over Allegan in a Wolverine Conference non-divisional boys basketball contest Friday night.

Jacob Pegura was the Eddies’ leading scorer for the second straight game as he scored a game-high 16 points. Isaac Merrill added 14 points and Luke Stowasser 10 points.

Leading by two, 31-29, after three quarters, the Vikings’ offense erupted in the final eight minutes to pull away to a 52-46 Wolverine Conference non-divisional boys basketball.

The Vikings outscored Paw Paw 8-4 in the third quarter to take the two-point advantage.

Anthony Brady led Niles with 11 points, while George Pullen and Jordan Edwards both finished with 10 points.

Cullen Sylvester led the Red Wolves with a game-high 16 points.