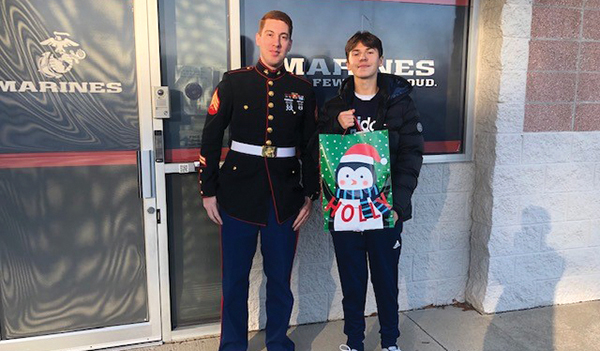 NILES — Sawyer Lundberg, a sophomore at Niles High School and member of the student council, spearheaded an effort for Niles High School students to write holiday cards to troops. Lundberg dropped off more than 370 holiday cards to the U.S. Marine Corp office, 732 S. 11th St. to Marine Corp Sergeant Michael Feola. The cards will go to active duty Marines stationed in the U.S. and around the world.

Lundberg, who has family in the military, was inspired by a similar project his brother’s Eagle Scout troop did to make cards for men and women stationed around the world to be thought of and appreciated while away for the holidays.

After approaching his guidance counselor, Carrie Rinehart, and English teacher/advisor, Dustin Cornelius, about getting the school involved, 250 cards were produced by Lundberg’s fellow students. More than 120 cards were made by Lundberg and his family.

After the success of this year’s project, Lundberg is aiming for 500 cards next year.

“I hope we get a lot more,” he said. “I hope the troops reading the cards will be happy to know that someone cares about them.”