Accolades a plenty: Niles volleyball reaping the rewards of a great season 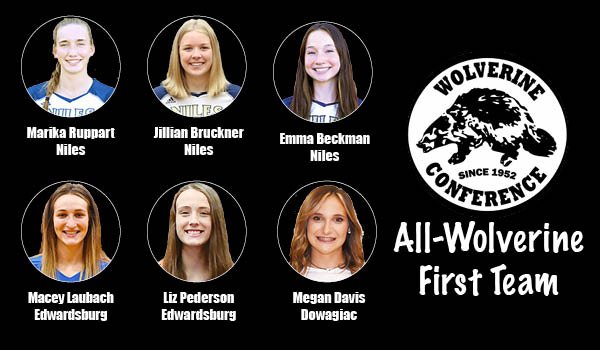 NILES — When you have the type of season that the Niles volleyball team did, the awards are sure to follow.

The Vikings, who reached the Division 2 state quarterfinals before being eliminated by three-time defending state champion Grand Rapids Christian, are beginning to receive those accolades.

Not only did Niles dominate the All-Wolverine Conference squad, the Vikings also landed multiple players on the Michigan Interscholastic Volleyball Coaches Association’s All-Region and All-State squads, which were released Monday.

In its debut season in the Wolverine Conference, Niles went undefeated to capture the league title with a 9-0 record. The Vikings went on to win the Division 2 District and Regional championships. Niles finished with a 47-9 record, which was one victory shy of tying the all-time mark the Vikings set in 2017.

“After a great season, this special team has a lot to celebrate,” said Niles Coach Jenny Nate, who was named the Wolverine Conference Coach of the Year. “Each year, all of the teams I coach are special and unique, and this team definitely brought its own eclectic mix of positive traits that led to our amazing run. They brought kindness, passion, energy, positivity and grit to every single practice, conditioning session, scrimmage and match we played this year.”

“Marika was our team captain, and has led our team in kills and blocks, the entire year this year and last year against the highest levels of competition,” Nate said. “She is a great team player, outstanding athlete and is also ranked No. 1 in her class academically. She is an amazing, kind, scholar-athlete.”

“Jillian is a dynamic junior and team captain,” Nate said. “She is a fiery, fierce competitor.  She is the loudest, most energetic player on our team and really brings a presence and positive energy to the court. She, along with Marika, led our team in kills and blocks this year and last year. She is an outstanding teammate as well as one of our top, all-around players.”

“Amara is a lefty, quiet force on the court at the right side,” Nate said. “She is dynamic and is a playmaker. She is one of our top attackers, along with our middles, and she is an extremely smart player. She has great shots and puts up an excellent block against our opponent’s outside hitters and middles.”

“Emma definitely leads our court as a setter and right-side hitter (running our 6-2) offense,” Nate said. “She makes outstanding set selections and definitely contributes to our top hitters’ positive hitting percentages. She is a blast to coach; she is always happy, smiling, encouraging, and is an awesome teammate. She is also one of our top go-to hitters, servers, and defensive players.”

“Cadence is our outstanding libero,” Nate said. “When Cadence is on the court, our team is calm and trusting. Cadence’s serve receiving, digging and out-of-system setting is a huge part of our team’s success. We can always count on Cadence to get us the passes we need in order to run all three of our hitters, and she does an excellent job reading the opponents’ attackers. She makes exciting defensive plays and is a great competitor.”

Edwardsburg and Dowagiac were also represented on the All-Wolverine Conference and All-Region teams.

The Eddies’ Macey Laubach and Liz Pederson were first-team All-Wolverine Conference, while Drew Glaser was a second-team selection and Danni Purlee an honorable mention pick.

Laubach, Pederson, Davis and Wimberley were all Division 2 All-Region selections.

Individual statistics for Edwardsburg were not available.