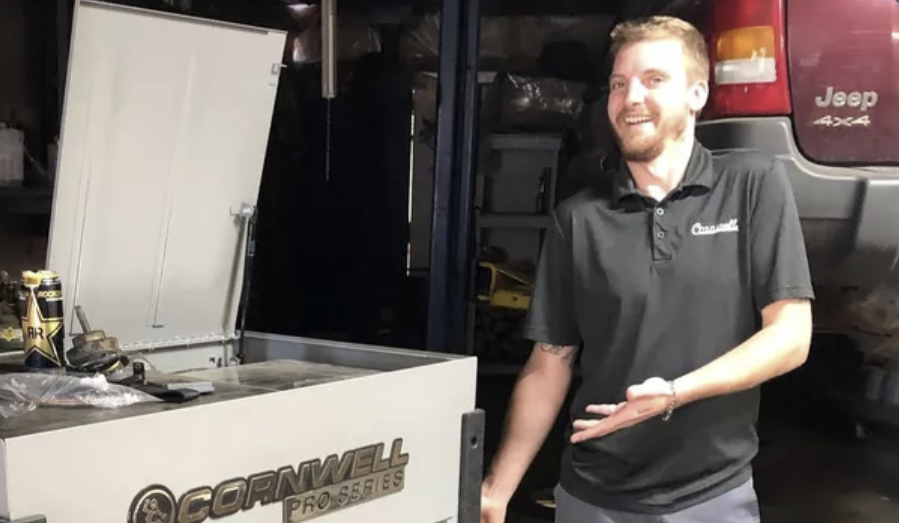 NILES —  A local business rallied to support a Dowagiac man recovering from a serious injury.

The event, which featured a silent auction consisting of items donated by community members, was held in support of Brandon Stattler, a Dowagiac native who suffered a serious accident last month involving a skid steer.

Stattler’s girlfriend, Brittney Reist, works at Front Street Pizza Pub and helped organize the event, which raised more than $4,000 that will be used toward Stattler’s medical bills as Stattler does not have medical insurance. In addition to the benefit, a GoFundMe was also created for Stattler that as of Thursday morning has raised more than $5,500.

“It’s amazing to have so many people in your corner check up on you,” Reist said. “You get overwhelmed with people truly caring and wanting to help. It’s been really huge. Without this support, I don’t know where I’d be mentally. It’s been a huge support having everyone help us.”

“It warms my heart,” said Stattler, who was not able to be there due to rehab. “I’m shocked that so many people came together for this. It shows how much I mean to people. It’s a surreal feeling. It makes me want to cry, honestly.”

The response may have come as a surprise to Stattler, but not to Reist.

“He will do anything for anybody,” she said. “He used to be a mechanic and worked on everyone’s cars. He’s willing to help anyone out at any time. He’s just an overall great guy. He has a good heart, he’s just a good person.”

Stattler is a franchisee with Cornwell Quality Tools, a company that manufactures automotive and aviation hand tools. According to Stattler, the company has deferred all of his bills and payments until he is ready to get back to work.

“I could not ask to be around a better group of people,” he said.

According to Stattler, who is currently rehabbing at Mary Free Bed in Grand Rapids, he was re-grading his driveway with his skid steer when a sharp turn on wet gravel tipped the skid steer over.

“When I turned around with the machine, it tipped forward and threw me out between the bucket and machine,” he said. “I tried to move out of the way, caught my feet between the tires and it started to run me over that way.”

Stattler said he screamed for help for roughly 15 minutes before a friend who had been hunting on his property emerged to investigate.

Upon arrival, Stattler’s friend called 911 and medics arrived along with True’s Towing, which lifted the skid steer off his body.

“Once they picked the machine up, the amount of blood rushing to my lower body was insane,” he said. “They got me in the ambulance, but my body felt like a cornhole bag.”

The ambulance transported Stattler to Bronson Methodist Hospital in Kalamazoo. The news came as a shock to Reist, who was at work at the time of the incident.

“My phone was ringing and his dad was calling me, which never happens,” Reist said. “He said Brandon had the skid steer fall on him. I was in shock. I didn’t know what was going on. I lost mom five years ago, so the situation was giving me PTSD. A lot was going through my head.”

The accident caused numerous, life-threatening injuries to Stattler — including a broken collar bone, a broken pelvis and a ruptured bladder, among others — that required multiple surgeries.

“The pain has been excruciating,” Stattler said. “I’m trying to be independent. It’s crazy the things you take for granted in life once you can’t do them anymore.”

With the accident in the rear view, Stattler has been hard at work rehabbing his legs. According to Stattler, he is looking at three months before he will be able to put weight on legs.

“Right now I am teaching myself to live out of my wheelchair,” he said.

Reist is proud of the strides Stattler has made in his rehab.

“He is able to do transfers from his bed to his chair,” she said. “He’s regaining movement in his right leg but is still struggling with the left leg. He’s improving bit by bit, eating better and is a lot more alert and active.”

The process has been a challenge for Reist, who is doing her best to support Stattler while taking care of things at home.

“My life has been put on hold in a sense,” she said. “I’ve taken the last few weeks off from work and have been trying to help his business. Right now, life consists of hanging out with him, taking care of our animals at home, and sustaining normalcy. Maintaining a routine and consistency is the best thing for me to do right now.”

While life has been difficult for the Stattler and Reist in the month since the incident, they have been able to find strength in each other.

“I cannot thank her enough,” he said. “It’s been really rough on her. At first she was shocked but she made things happen. If it wasn’t for her, I don’t think I’d be here now. She’s the glue holding everything together.”