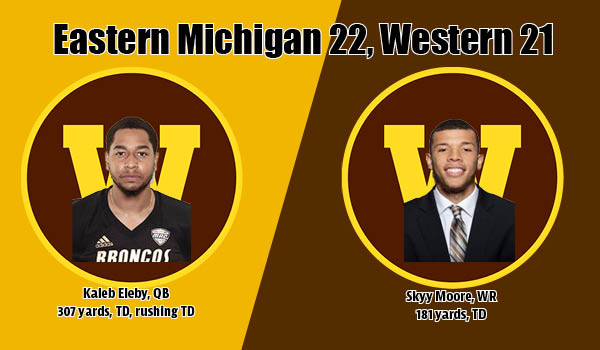 Moore finished with career-highs in catches (12) and receiving yards (181), and had a 74-yard touchdown. It was his seventh 100-yard performance of the season, and fourth game with 10 or more receptions.

Kaleb Eleby finished 22-for-29 for 307 yards and a passing touchdown and rushing touchdown. Sean Tyler had 10 carries for 54 yards and a score, while La’Darius Jefferson had 12 rushes for 86 yards.

Defensively, Corvin Moment led the Broncos with nine tackles, two for a loss. Ali Fayad recorded four tackles including three for a loss and a sack.

Later in the second quarter, the Broncos limited the Eagles to a pair of field goals in the red zone, and went into halftime with a 7-6 lead.

Western Michigan received the opening kickoff of the second half, and promptly marched down the field for a touchdown, capped by a 21-yard rush by Tyler to put the Broncos ahead, 14-6. The Eagles then tacked on a field goal to make it 14-9.

Receptions of 13 and 29 yards from Moore put the Broncos into Eastern Michigan territory on the ensuing possession. La’Darius Jefferson had three consecutive rushes to put the ball at the EMU one-yard line, before Eleby punched it in with a rush up the gut to put WMU ahead 21-9 with 2:47 left in the third.

Eastern Michigan answered again with a touchdown on its next possession after a 19-yard catch and run by Hassan Beydoun to cut the WMU lead to 21-16 with 35 seconds left in the third.

In the fourth quarter, EMU kicked a field goal to make it 21-19 with 7:21 to go. On the next possession, the Eagles forced a Bronco fumble and recovered on the WMU 41-yard line. The Bronco defense stepped up and held the Eagles to another field goal, but EMU took its first lead of the game at 22-21 with 3:55 remaining.

The Broncos had a chance to take the lead on their next possession, but Eastern Michigan tipped an Eleby pass at the line and pulled down an interception to seal the game.

Up next, the Broncos travel to Northern Illinois Tuesday, Nov. 23 for a 7 p.m. kick to close out the regular season. The game will be broadcast live on ESPNU and the Bronco Radio Network.