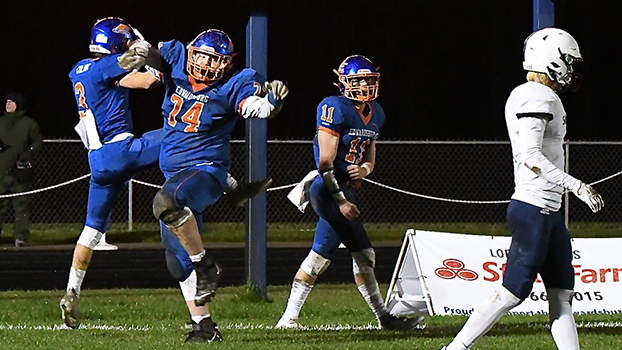 The Eddies (12-0) advance to play Hudsonville Unity Christian (12-0) Saturday in the D4 state semifinal round. The Sailors finish the season with an 8-4 record. The site of the semifinal game will be announced by the Michigan High School Athletic Association Sunday.

“They were physical with us,” Bartz said. “We had to grind everything out. Nothing was given. This was old Edwardsburg football. This was grinding it out. This was not the big plays [we’ve had recently.]”

Edwardsburg struck first in the opening quarter. Running backs Logan McColley and Andrew Colvin scored on runs of three and 31, respectively, to give Edwardsburg a 14-0 lead as the second quarter unfolded.

The Eddies outgained the Sailors 340-201 in total offense, with every yard coming on the ground.

Colvin, who replaced Edwardsburg’s leading rusher Jacob Walker, who left the game in the first quarter with an ankle injury, led the Eddies with a team-high 96 yards and two touchdowns on 11 carries and Logan McColley tallied 17 carries for 83 yards and two scores, while Pegura finished with 13 carries for 56 yards. Connor Ostrander tallied 11 carries for 47 yards and Isaiyah Schwartz four carries for 26 yards, with both players adding interceptions on defense.

Landon Mikel and McColley led the team with six tackles.

South Christian quarterback Jake DeHaan proved to be a handful for the Edwardsburg defense. The dual-threat junior tallied 10-of-16 passes for 157 yards, one touchdown and two interceptions. He also had 15 carries for 69 yards and one touchdown.

On third and goal from the 16-yard line, DeHaan found Colton Schreur for a 16-yard touchdown catch to trim Edwardsburg’s advantage to 14-7 at halftime.

Trailing Edwardsburg 21-7 following a 36-yard score from Colvin, a 33-yard flea-flicker pass by DeHaan set up a 1-yard DeHaan touchdown run to pull South Christian within one score with 2:38 left in the third.

The fourth quarter saw the Sailors — fighting to stay within one score of the Eddies — stop their foe on fourth and goal from the 2-yard line to force a turnover on downs.

Setting up shop on the Edwardsburg 1-yard line, South Christian was forced by the Eddies to punt after going three-and-out.

The Eddies capitalized on a 25-yard Sailors punt and churned their way to the goal line. After Edwardsburg was ruled down at the 1-yard line on a controversial call by officials, McColley punched it for the touchdown to put the Eddies up 28-14.

The game effectively ended when Schwartz picked off a DeHaan pass in the closing moments.

“It was a good win for us,” Bartz said. “Defensively to hold them to 14 was big. They’re very diversified in what they do. They run the ball extremely well. They didn’t get too much of a passing game going. That’s a quality football team. That’s a big win for us moving on.”

South Christian Head Coach Danny Brown was proud of how his team fought and congratulated the Eddies on their victory.

“They’re a heck of an offense,” Brown said. “Our goal was to try to make them work for it and we did. We didn’t obviously make enough plays in the end. They’re really good. I mean, they just know what they do, they’re physical and they play hard. He’s got a good group of kids over there.”