Tomb of the Unknown Soldier guard shares his experience at SMC 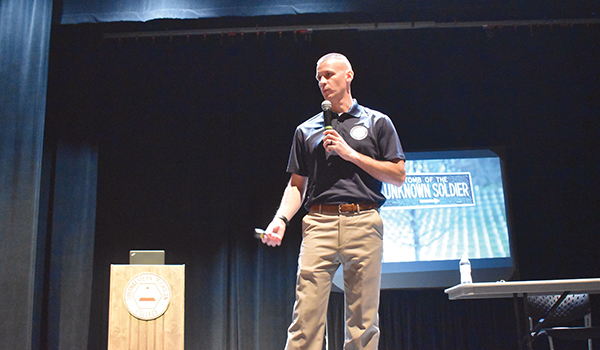 DOWAGIAC — A local college commemorated Veterans Day by remembering the soldiers whose names and identities have been lost to time.

Stuart Aspinall, a Tomb of the Unknown Soldier guard from 2018 to 2020, visited Southwestern Michigan College’s Dale Lyons Theatre Wednesday evening to share his experience being assigned to the tomb and being a member of the Society of the Honor Guard. He also spoke about the history of the tomb and the legacy it has left.

Aspinall was brought to SMC through a partnership between SMC and the Buchanan American Legion. Aspinall also presented to the Legion Hall, 403 E. Front St., Buchanan, Thursday evening.

“I’m happy I can be here tonight and give these presentations,” Aspinall said. “Today, we are going to talk about the Tomb of the Unknown Soldier, my time there.”

Aspinall began his presentation by talking about the history of the Tomb of the Unknown Soldier.

Located in Arlington National Cemetery in Virginia, the Tomb of the Unknown Soldier is a historic monument dedicated to deceased U.S. service members whose remains have not been identified.

The Tomb of the Unknown Soldier was approved in 1921 following World War I, and unidentified remains of US soldiers, of which one was selected, were brought back from France to be interred in a three-level marble tomb.

This week, the tomb celebrated its centennial anniversary.

Later, unknown soldiers from World War II, the Korean War and the Vietnam War were added. The Vietnam tomb is now vacant as the soldier was identified through DNA testing in the 1990s.

The tomb is continually guarded by soldiers of the U.S. Army.

Following an explanation of the history of the tomb, Aspinall talked about his experience working with the guard. He talked in-depth about the training process and strict measures in place to ensure the tomb is properly guarded.

Aspinall said tomb guards go through nearly a year of training and testing to ensure the ceremonies and changing of the guard that take place at the tomb are timed down to the second — down to the step.

He also spoke about the strict standards uniforms are held to. Aspinall said he spent hours on his days off steaming his shirts, shining his shoes and ensuring his pants were properly tailored so that no creases ever showed.

“Anything we can do to make our uniforms look even better, we are going to do that,” he said. “People always ask, ‘why do you do that?’ The answer is that the soldiers on the plaza gave their lives protecting us from enemies, so the least we can do is look out best when we got out there to guard them.”

Aspinall said tomb guards work long hours in all weather — from grueling heat to stinging cold. Despite the hard work and dedication required to serve as a tomb guard, he said he enjoyed his experience and believes it is important work.