Vikings gearing up for Wildcats 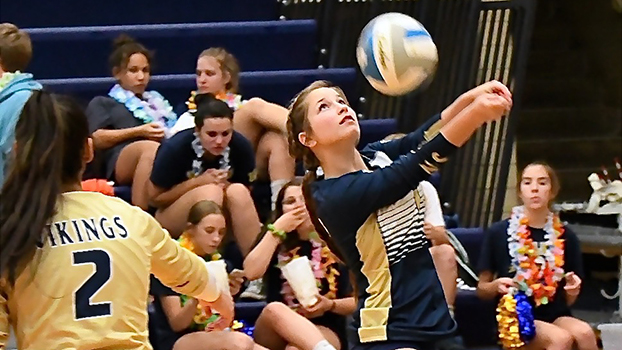 NILES — Hard work and dedication will hopefully pay off for the No. 6-ranked Niles volleyball team in its Division 2 Regional championship match at Vicksburg High School Thursday night.

The Vikings have been working hard since last spring to prepare for the 2021 season. So far, that work has resulted in an undefeated Wolverine Conference championship, a Division 2 District championship, and a shot at the school’s second regional title.

Niles won its only regional title in 2017 when it defeated Edwardsburg 3-2.

The Vikings, 46-8 overall and just two wins away from tying the school record for most victories in a single season, advanced to the championship match Thursday with a 3-0 win over Wolverine Conference runner-up Otsego Tuesday night.

Niles will face another Wolverine Conference foe — Three Rivers — for the regional championship. The Wildcats, who finished tied for third in the final conference standings, rallied to knock off Grand Rapids South Christian 3-2 at Vicksburg High School Tuesday.

Led by a powerful front line that includes seniors Marika Ruppart, Amara Palmer and Emma Beckman, juniors Jillian Bruckner and Chloe Alkire, along with sophomore Zyon Brazo, have been dominant throughout the regular and postseason.

Niles has played well in all phases of the game, including defense and serving.

While the front row draws a lot of attention, the defensive specialists — junior Kailyn Miller, sophomore Amelia Florkowski and senior libero Cadence Knight get the balls to setters junior Anna Johnson and Beckman to deliver for the hitters.

Veteran Niles Coach Jenny Nate and her squad have spent a lot of time, both in practice and matches, on spreading the ball around offensively so that teams cannot load up defensively on the Vikings’ middle hitters or outside hitters.

That has allowed Niles to make changes on the fly.

“At the end of the day, once again, on offense especially, it takes us a few minutes, but when these teams prepare for us, we make all these adjustments,” she said. “The middles took a little bit of heat. They switched it up. We got it to our pins [outside hitters]. I thought our defense did a phenomenal job. We had some great digs. Our setters mixed it up. We were very patient on a lot of really long rallies. You have to wait it out and outlast the other team. That is what we did.”

The Vikings will now turn their focus to Three Rivers, a team that has picked it up during the postseason. Nate said she was not totally surprised by the Wildcats’ win against the Sailors Tuesday night.

“I had not seen South Christian play this year, to really make that call,” she said about what some felt was an upset. “Three Rivers has some strong hitters. We know that. They are scrappy and good. They are well-coached. I knew they would bring a fight.”

Nate said that having played the Wildcats during the season, and seeing them again against South Christian, will help the Niles team prepare for the match.

“We will bring the fight on Thursday,” she said.