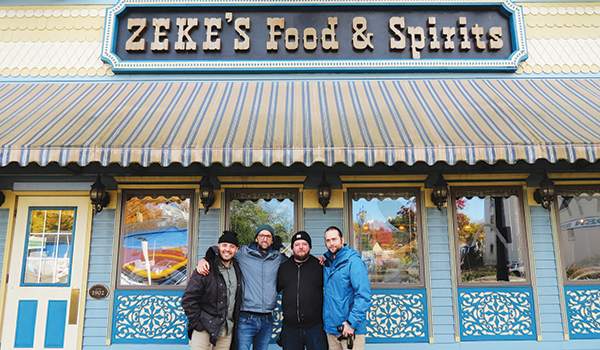 The ownership group behind Propaganda Pizza, 92018 M-152 in Sister Lakes, and South Bend’s Fatbird have closed on the purchase of the former Zeke’s Restaurant space at 105 to 109 S. Front St., and will be installing a Texas-style barbeque joint called Barred Owl BBQ.

Haunt of Hounds, LLC – consisting of restaurateurs and partners Tim Tinker, Jordan Mullins, Alain Helfrich and Austin Cabello, along with a few local investors – purchased the site from the city after it sat vacant for about a year following the closure of Zeke’s.

The day after the sale closed, the group got to work. With a goal set for a summer 2022 opening and extensive renovations, the group is focused and thrilled to be forging ahead.

“It’s way better than trying to figure out how to get the deal done, that’s for sure,” Tinker said. “We’re super excited to open the place back up and bring some life and light back into it, find the historical elements that were left behind from many, many iterations of this space previously. There were a lot of narrow and low ceiling corridors and spaces. Basically, what we’re doing is just going back to the roots of what this building originally was, which are tall ceilings and an open floor plan.”

Zeke’s regulars will be familiar with the bar area, which will stay in the same place, but with a floor plan wrapping around it

“Back to its roots with a little contemporary restaurant touch to it,” Tinker said. “We want to show of what was beautiful about this building – tin ceilings, brick walls.”

“We’re going to lean heavy into the Texas-style barbeque,” Helfrich said. “We will have two very large smokers run with oak, and then a little bit into the harder woods – hickory, fruit woods, things like that.”

In addition to the smoked meats, the restaurant will offer sides, sandwiches, salads, tacos and a full bar.

‘It still has its charm’

Tinker, who moved to Sister Lakes about 12 years ago and whose wife is from the area, said one of the things that attracted the group to Dowagiac is its character.

“It’s a cute little town that’s kept its history,” he said. “It didn’t rip down all of its facades at some point and replace them. So, it still has its charm. That’s one of the things, and I think this community deserves good food, and we love bringing good food to places. We have Propaganda Pizza in Sister Lakes and have had great community support there, so we think that the same level of support here is incredibly likely.”

Helfrich, who had previously worked at Wood Fire Trattoria, said he fell in love with Dowagiac when he worked there about 10 years ago and lived in the Indian Lake area.

“I’ve had this outsider admiration for more than a decade,” he said. “I think this community really needs a central, ‘everyone’s welcome,’ approachable food for everyone in a casual setting type of restaurant.”

While the group said they can see the restaurant being a destination restaurant for southwest Michigan, they are primarily here to serve the locals, and already have gotten a taste of the community while serving the Business After Hours event at the Altus Apartment last week.

The group catered the food at the event, so the community also got a taste of what they are about.

“It’s been amazing to hear from the community and how open and welcoming they are,” said Mullins, adding the barred owl is known as an approachable type of owl, which is how they envision the restaurant. “It’s been overwhelmingly amazing. From the event at the Altus and just how excited everyone was, it made us even more excited.”