PHOTO GALLERY: Brothers have been spooking guests in Fulkerson Park for 15 years 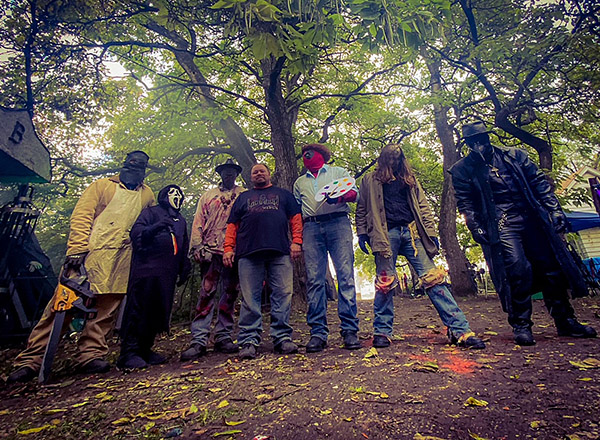 NILES — Lights flashed in a yard on Fulkerson Road Sunday night as evil laughter and thunder claps echoed down the street as one Niles Township home gave out more tricks than treats.

As guests young and old made their way through the maze, they were spooked by dolls swinging on tree swings, goblins popping up from trash cans and Frankenstein undergoing surgery.

Every so often, a man with a chainsaw or a Zombie hungry for brains jumped out of the shadows, followed by a shriek from a startled trick-or-treater.

The setup, which included dozens of mechanical monsters, a spooky tunnel, sound effects and flashing lights, was created by the Matt and Nathan Burns, who grew up in the Fulkerson Park neighborhood.

“It started back from my childhood,” Matt said. “We were always sick on Halloween, so [instead of trick-or-treating] we started down on Lawndale hanging bats on ropes scaring people from the window.”

Today’s scares — now in their 15th year — are a bit more elaborate, with werewolves growling and a giant spider jumping at those who cross its path.

“We have generations that come through,” Matt said.

Ten minutes before trick-or-treating began, Nathan worked in a nearby garage fixing a mechanical werewolf.

“We have everything from 90-year-olds to 2-year-olds who come through,” he said. “It’s a tradition, and it grows every year.”