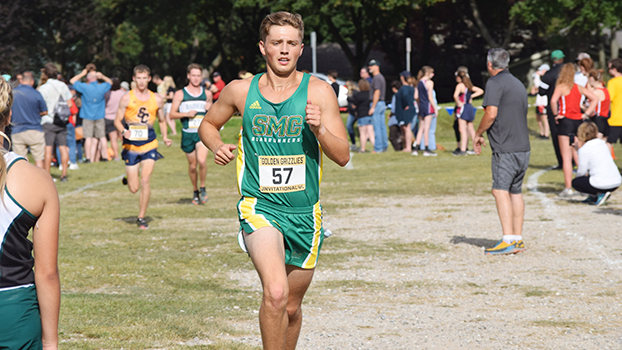 DOWAGIAC — With its first competition at the NJCAA Region XI Division II Cross Country Championships in 25 years set for Saturday, Southwestern Michigan College has its eye on more than just a good showing at the meet in Lansing.

The Roadrunners want to advance to the national championship next month.

“On the men’s side, we’re in a good position” for the NJCAA Region XII Meet at Grand Woods Park in Lansing, SMC Head Coach Zac Sartori said. “I’ve got my top seven healthy enough that they’ve all been training pretty well for several weeks. This is our last hard week, then they taper down. Coming into regionals, they should feel fresh. Looking ahead to nationals Nov. 13 in Richmond, Virginia. They should feel amazing, with all the aches and pains and tiredness gone.”

The Roadrunners already ran the regional course during the Lansing Invitational earlier this month. SMC officials said spectators can look for a more aggressive squad at regionals, where Lansing Community College and Grand Rapids Community College are favored.

“Kelsey (Brown, Buchanan) likes to get out fast, and I’m going to send out the Saylor brothers (Ethan and Alec, Dowagiac) to challenge all three,” Sartori said. “It will put them in a better position to keep moving fast. If you get out fast and settle in, you settle in at a faster pace. It’s easier to stay fast than it is to pick up the pace. I’m looking for those three to pack up and for the remaining four to work together. I’m looking to compete with St. Clair. If we can put a couple of our guys between their one and two, and another couple between their three and four, we can challenge them.”

Sartori is pleased with how his teams have performed in their inaugural season.

“It’s been an amazing first season,” Sartori said. “For me, in my first season as head coach, and the program for its first season back in 25 years. It’s been a blast, and I’ve had so much support, with the college president coming to multiple meets with us. We’ve got a solid footing that will help me recruit. Even if we finish fourth in this conference of 16 teams, we’re in the top quarter.”

“I ran at the University of Arkansas under John McDonnell,” he said.

McDonnell’s 40 national championships in 36 years included 19 in indoor track, 10 in outdoor track and 11 in cross country — more than any coach in any sport in the history of college athletics. The Razorbacks’ outdoor track facility is named John McDonnell Field.

The SMC sibling rivalry had been a plus for the program Sartori noted.

The Saylor brothers’ competitiveness with each other adds a ‘great dynamic,‘” he said. “[Robert] Buster (Ward, Cassopolis) is quick and challenges them that way. They’ve all responded positively to challenges. The most experienced competitor I have is Kelsey, who has phenomenal talent.”

As early-arriving SMC students and staff know, the team has been pounding the well-lit campus pavement lately, rather than lapping the dark fields on the east of campus.

“Earlier in the season, speed workouts were more controlled,” Sartori noted. “We worked on building up a strong engine, teaching their hearts how to pump more blood and their lungs how to take in more oxygen and deliver it to their muscles. At this point, we’re teaching their bodies how to be fast. Grass was great for developing strength, but pavement develops speed. I don’t think there’s anyone on the team who has not improved significantly since week one.”

Moving in last August, when athletes had the campus to themselves, facilitated bonding.

“They all clicked immediately,” Sartori said. “They got to hang out without distractions and get to know each other. The men and the women are tight groups, which is a real blessing with a mix of personalities.”

Sartori, who came on board in June, inherited eight runners from early recruiting.

“It was great to have a solid base, but I honestly didn’t know what this season would look like,” he said. “I knew I had Ethan, but not his brother, Alec. I knew I had the Cassopolis trio (Ward, Ben Gillesby and William Westphal). I knew I had Sam (Loomis, Otsego), Gavin (Smith, Decatur), Alex (Blanton, Plainwell) and Levi (Hall, Mishawaka). Levi is feeling strong and is poised to have a really good end to his season. When he tapers down, he’s going to see the benefits probably more than most. More importantly, he’s poised to do really well next year, along with Ethan and the Cass guys, because all of them are building up mileage and the intensity of their work. Three years ago, Gavin was running 31-minute 5Ks. Now, he’s running 20:40 through 5K. He’s improved significantly to cut off 10 minutes. Grit and mental toughness are big determining factors.”