Lesniak to be honored before Niles game 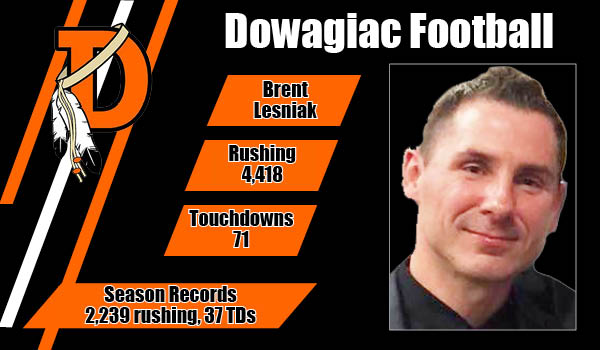 Lesniak still holds all of those records, many of which may never be broken. His accomplishments will be remembered Friday night when the Chieftains host arch rival Niles in the “Black and Blue” rivalry game at Chris Taylor-Alumni field.

Dowagiac Athletic Director Brent Nate will present Lesniak, who rushed for more than 4,000 yards in two seasons for the Chieftains, with a framed jersey while his accomplishments and records are read.

Lesniak’s jersey will then join Dontel Highsmith’s, Edgar Wilson’s and former Dowagiac Baseball Coach Dean Hagen’s as being removed from rotation, meaning they will not be worn by another Chieftain moving forward.

“When I found out, I was pretty shocked,” Lesniak said about learning of the honor. “I have been talking to Brent Nate since about 2019, and then COVID hit. I think it all kind of got brewing when the Dontel thing happened.”

Lesniak likes the timing of the honor. He was originally going to be part of a three-person crew covering Dowagiac football on the Dowagiac Chieftains Network, but an opportunity arose to be part of a two-person crew covering St. Joseph games for the St. Joseph Bears Sports Network, which like Dowagiac’s, is owned by Joe Jason. He decided to go that route.

He feels that Friday night’s ceremony will bring Chieftain fans something to smile about in what has been a down year for Dowagiac.

“I think it is kind of a pick-me-up because we know Dowagiac is struggling right now,” Lesniak said. “Just a reminder that it wasn’t that long ago there were plenty of good things going on with Dowagiac football.”

Being honored before the Niles game seems fitting because Lesniak was a thorn in the side of the Vikings his junior and senior years he said.

“That was our huge rival, along with Lakeshore,” he said. “What makes it really interesting is that Scot Shaw is going to be on the other sideline. We all know he was on the other sideline when we had the famous touchdown run down the sideline. With Scot being there, with Niles bringing back that rivalry with Dowagiac, I think it is the perfect place to do it.”

Lesniak is referring to the 1996 playoff game at Chris Taylor-Alumni Field when he raced down the Wildcats’ sideline for the game-winning touchdown. The Chieftains and Three Rivers played in less than perfect conditions that day as it snowed before the game, but the temperatures rose into the 40s by game time.

Dowagiac officials did a good job of clearing the snow off the field, but the moister from the heavy snow made footing treacherous at times.

Lesniak said he has nothing but fond memories of playing at Dowagiac. He would go on to play at Grand Valley State University and help the Lakers to a National Championship under Head Coach Brian Kelly. He also played professionally, but his days at Dowagiac will always mean more.

“I was fortunate to get to play at Grand Valley and to play professionally, but was no experience like Dowagiac where the community was a part of it,” he said. “Every Friday night, everybody came out to watch the football game. It really was true that people would shut things down and come watch the game. That environment, not only when I played, but everything I remember as a child, everybody was a part of it. Everybody traveled. That is what you did on a Friday night. I did not get that experience anywhere else.”

There are three games he remembers the most from his career.

“They are all about the same, but for different reasons,” he said. “Obviously, scoring the touchdown against Three Rivers in the last seconds. That may be my greatest moment, but also, the Detroit Country Day game because you would have to go back a long time to find a Dowagiac football team that played a better football game against the defending state champs. They had guys like Javin Hunter, who played at the University of Notre Dame, and we beat them 52-0. Then there is the Northwood (Indiana) game we lost. We had to pick that game up, and we were winning by 17 or 20 points in the third quarter and the game just kind of slipped away. Northwood in the next year or two went on to play for an Indiana state title, and we never make the playoffs.”

Kickoff for Friday night’s game is scheduled for 7 p.m.

Here are the records Lesniak holds at Dowagiac: