Ride for Tyler donates $10,000 to family of child with rare heart condition 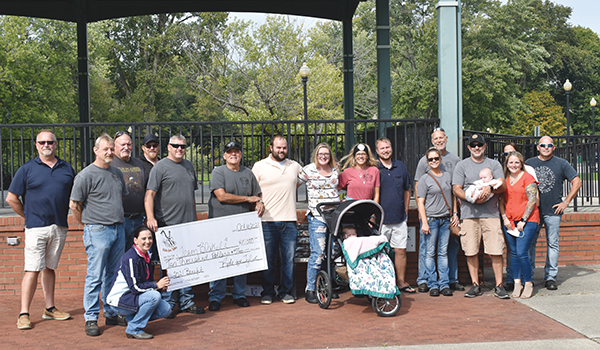 NILES — Recently, the community put the pedal to the metal to help a family in need and honor the memory of a beloved husband, father and friend.

Last month, the friends and family of the late Tyler Harding, of Baroda, hosted the inaugural Ride for Tyler fundraiser, which saw motorcycle riders from across the region cruise through Niles in memory of Tyler Harding, who died last November from a heart condition, mitral valve prolapse. The ride raised $10,000, which Ride for Tyler officials donated this week to an area family in need.

“Seeing how many people came out and how much money was raised has been overwhelming,” said Alexis Harding, Tyler’s widow. “There has been just so much support.”

The money was donated to Robert and Courtney Taylor, of Three Rivers, whose infant daughter, Blakeli, was born with a birth defect of the heart known as total anomalous pulmonary venous return. In her short life, Blakeli has undergone multiple heart surgeries.

Ride for Tyler officials learned of Blakeli’s story, as Blakeli and Tyler shared the same pediatric cardiologist. When Alexis learned she could help a family also dealing with a heart condition, she knew it would be a fitting way to honor her husband’s memory.

After receiving a larger-than-life check Sunday afternoon, the Taylors said they would use the donation to help cover Blakeli’s medical bills and treatment costs.

“We really appreciate everyone’s time and effort that they put into this. This is amazing,” Courtney Taylor said. “It’s amazing that they are keeping Tyler’s memory going and helping families who are going through the same kind of thing.”

During Sunday’s donation, board members for the recently-established Ride for Tyler nonprofit said they knew that Tyler would be proud if could have been there to see the moment.

“Tyler was the most kind, caring, loving and generous person,” said President Janet Lassen. “I’m just overwhelmed with gratitude. He was one of a kind.”

“He would give the shirt off of his back to anybody,” added Alexis, who also serves as the organization’s vice president. “He had the biggest heart. He would be so happy to see this.”

After a successful first year, organizers hope to establish Ride for Tyler as an annual event. Already, they have planned the next ride for Sept. 17, 2022.

“Our goal is to find a family in the community who has a similar heart condition,” Lassen said. “We feel so blessed that we are able to help in this way.”