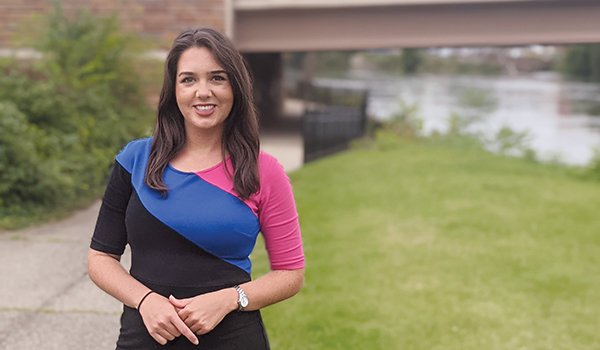 NILES — Selina Guevara is used to having her finger on the pulse of the community.

The former WSBT news reporter canvassed the Michiana area for two years and built relationships with business owners and community members alike to tell their stories.

Though she is no longer behind the camera, Guevara aims to continue to engage the community in her new role as the Greater Niles Chamber of Commerce’s director of membership and communications.

“It feels like a natural transition,” she said. “My favorite days as a reporter were the days where I would just get to spend the day with someone and get to know them. Oftentimes, I couldn’t spend as much time as I wanted to because there were such tight deadlines, and you just have to film, shoot, edit and get it all done very quickly. Here, the entirety of my job is getting to know the local businesses and getting to know what their concerns are and helping inform them about any news that might be relevant to them and impacts them.”

A Bay Area native, Guevara attended and graduated from Elon University in North Carolina before moving to Michiana in 2019. Since then, Guevara has enjoyed the experience of living in the Midwest.

“I really like the area and the vibe,” she said. “People here are very nice to each other. Everyone for the most part is very welcoming. People just are very proud to live here and they’re proud of their communities. I like how supportive everyone is of each other.”

The people and their support for their communities stand out to Guevara.

“I like how much the people care about the community that they live in,” she said. “I want everyone to feel important and feel empowered in today’s business climate. … I want the businesses to get to know me. I don’t want to be just in this office back here. I want to be out and about and visit them. I want to hear what people are concerned about and know what they want going forward. I think we have some really cool tools where we can increase the city’s visibility for people to come here for certain events and stick around because they like downtown, the Riverwalk and everything else we have to offer.”

Guevara wishes to continue to build on the positive momentum the city has established in recent years.

“What I’ve gathered from all the times I’ve done stories in Niles is that people from Niles really care about the area,” she said. “Seeing the Riverwalk, the NODE and the social district possibility makes it clear Niles is really trying to become a place where people want to visit and want to be. It’s really cool to watch that because I know South Bend went through a similar thing before I got here. You see people wanting to come there and they’ve kind of been a tourist destination and Niles is doing the same. To see the downtown up and running and people getting out and about in it and caring about making it better.”

While her job title and duties may have changed, Guevara’s goal remains the same.

“I want to be able to tell the story of Niles going forward,” she said. “I’ve seen it with my own eyes, people supporting each other and being out and about. I want other people to see that too and to be able to come here and appreciate it.”