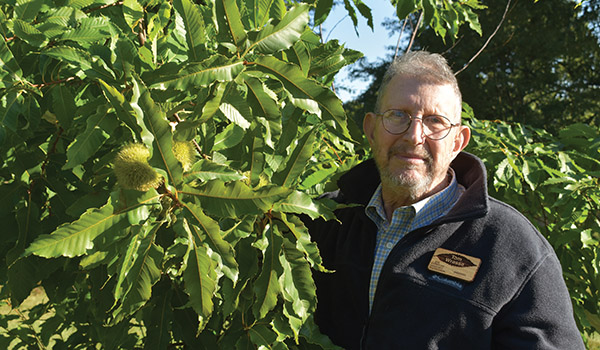 Standing outside the Bertrand Township Hall, he reaches up into a tree and pulls down a branch to examine a pair of spiky pods hidden among the leaves. Soon the pods will produce nuts — the first the tree has ever produced — and Wrasse could not be more excited.

“This is a restoration project that is coming to fruition,” he said. “I want people to know the story and be open to assisting with the restoration in their own areas.”

Wrasse has been passionate about American Chestnuts for more than a decade. He said he visited an experimental chestnut orchard with his wife in norther Indiana and learned the story behind the species. After that, he was hooked.

Though the trees planted in his home township are ready to produce their first nuts, Wrasse said the process has not always been easy. Along the way, some of the trees have died due to blight. Despite the hiccups, Wrasse called the program a success.

“This is very exciting,” he said of seeing the first chestnuts ready. “I’ve been waiting six years for this.”

Once the chestnuts are harvested from the trees at Bertrand Township Hall, Wrasse and other volunteers will take them and plant even more trees across the Michiana region to continue American Chestnut restoration.

“We are not done,” he said. “This is not the endgame. This is still a work in progress.”