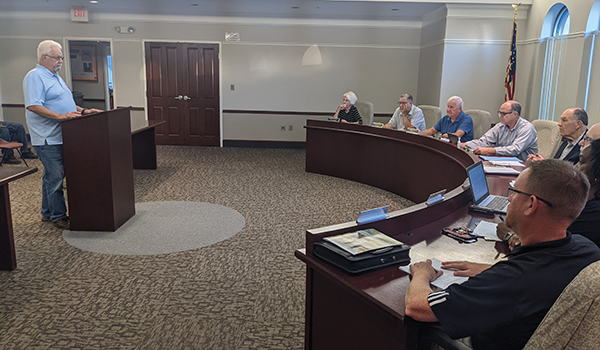 DOWAGIAC — A Dowagiac property that has long been a cause for concern by the community will soon be taken care of.

The Dowagiac City Council unanimously moved to declare the property at 403 W. Telegraph a blighted property and authorized its removal Monday night at City Hall.

The property received significant damage in February due to a house fire. A permit to raze the structure was issued several months ago, but no significant action from the property owner had taken place.

“We thought this was going to be taken care of quite a while ago,” said City Manager Kevin Anderson. “When the property owners came in and got a permit to demolish the building, it was month after month after month with no action.”

“That is our presumption, but we’re not going to count on it,” said Mayor Don Lyons regarding the presence of an excavator and dumpster on the property. “We are going to continue with this action, and if [the property owners] don’t, we will.”

The council hosted a public hearing on the matter prior to making its decision. The property owners did not attend the hearing.

Steve Lutz, a community member who owns property west of the blighted home, was adamant that the city makes sure the property gets removed.

“The house has been nothing but a pain for us for the last five years,” Lutz said. “We’ve called to have things taken care of there, with nothing being done.”

Lutz listed his grievances with the property that date back to before the February fire, including trash buildup and tree damage from a fallen tree in its yard. After reaching the contractor responsible for the house’s demolition, he was disappointed in the lack of action taken.

“The sooner you guys can get it done, the happier we will be,” Lutz said. “To be able to look out our back porch and not have to look at houses all burned up will be great.”

Lastly, the council approved a resolution authorizing budget amendments for the 2020-21 fiscal year.

Budgets are typically reviewed on a quarterly basis and then again at the end of the fiscal year for the purpose of making recommendations to council to amend the budget based on actual financial activity and revised expectations.