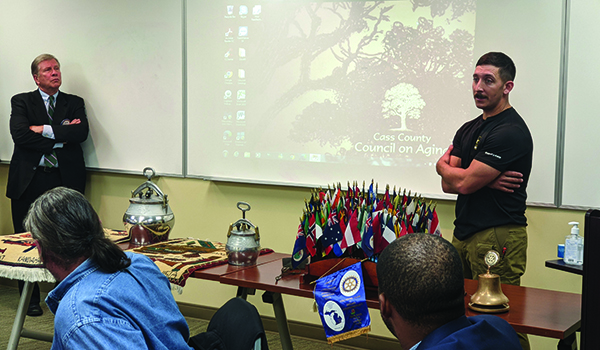 DOWAGIAC — An Army veteran spoke to a local organization about his experiences abroad.

Alex Marshall served two tours of duty in Afghanistan and recalled his time there at the Dowagiac Rotary Club’s weekly meeting Thursday at Front Street Crossing in Dowagiac.

Marshall — currently in his sixth year as a city police officer with the Kalamazoo Department of Public Safety — was first deployed from 2011 to 2012 to the city of Kandahar and was deployed again from 2013 to 2014.

He served as an explosive ordnance disposal specialist. EOD technicians are highly-trained military members serving in the Army, Marines, Navy and Air Force responsible for disarming, rendering safe, and disposing of explosive hazards.

“Anytime they find an improvised explosive device or they find an ordinance that we dropped or somebody else dropped, and it doesn’t explode, they call us and we take care of that,” Marshall said. “We also do post-blast on different things, like the ordinance that does explode and when vehicles are hit, we go out there and investigate them and try and gather as much evidence as possible so we can find information on the bomb maker that they have.”

Marshall’s job in Afghanistan was both important and extensive. Spending time with the Afghani people was a rewarding experience for Marshall, who resonated with Pashtunwali, the traditional lifestyle of the Pashtun people of Afghanistan.

“I love the way they are,” Marshall said. “I love their principles. One of the things you’ll see is grown men holding hands walking down the street. They do this because if I’m holding your hand and we’re walking down the street and they have a problem with you, they’ll have to get through me first. If they welcome you into their community, they will die before they let you get hurt.”

Marshall appreciated his experience so much that he wishes to go back someday, though he admits the chances of that happening are slim due to the U.S. pulling troops out of the region this summer.

According to Marshall, his team trained many Afghani and Polish soldiers during his second deployment. When asked if he was afraid of betrayal from the Afghani soldiers, Marshall said he trusted his men and that the war-weary people of the region supported whoever they felt had the upper hand at the time to try to create some stability.

“When it comes to the Afghani, they’ve been at the center of war forever,” he said. “These people survive by betting on the winning course. When we first showed up, the people were hesitant but when we started stomping on the Taliban, they began supporting us. When we left, I didn’t blame them for not sticking around. From my experience with the men I worked with, they were patriots, they loved their country and they were trying to do what’s best for their country.”

When the topic of the U.S.’ recent withdrawal from Afghanistan, Marshall delivered a swift response.

“I think it was going to happen either way,” he said. “The way it went down was crappy but either we stayed there forever or we had to leave eventually. .. I don’t see why we could not have something similar to what we do in other countries. We could have had a base like we do in places like Japan and Germany that could have been ready to help Afghanistan faster because once we left, we’re gone.

“Instead we just pulled out and we didn’t have anyone to help them so who is surprised that they’re all running?”

While Marshall is not sure if the army accomplished its goal in Afghanistan, he is proud of the work he did during his two deployments.

“My job was to make sure Americans didn’t die from IEDs,” he said. “I took care of as many explosive hazards as I could. For me, I did my mission. “