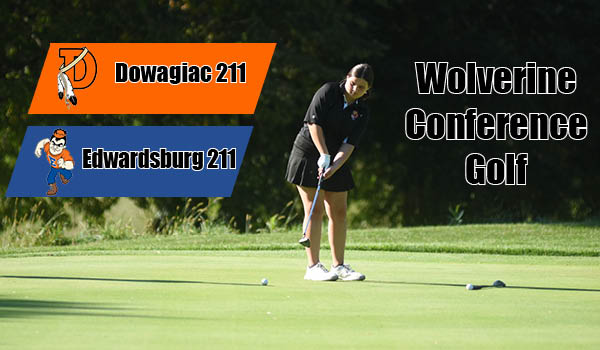 EDWARDSBURG — The margin of victory does not get any closer than it did for Dowagiac in its Wolverine Conference golf match with host Edwardsburg at Four Lakes Country Club Monday afternoon.

The Chieftains and Eddies were deadlocked at 211 after the top four scores were reported. That mean the match would be decided on the fifth-person score.

For Dowagiac, it was Cora Wegner’s 58 that gave the Chieftains the win by a single stroke over Edwardsburg, which had a 59 for its fifth score.

The win kept Dowagiac in second place in the league standings with a one final regular-season match against Niles Thursday at Indian Lake Hills Golf Course. The Chieftains will then try to gain at least a tie with Plainwell at the conference tournament Sept. 28 at Stonehedge North in Richland.

“You can’t get much closer than that,” said Dowagiac Coach Bob Turner. “It was a tough night. I told Steve [Wright], ‘hey, it’s a teachable moment.’ Every shot counts. You have to play play through to the end. Every shot. Every hole. We were on the other side of the tiebreaker last time and it cost us the conference championship a couple years back.”

Edwardsburg also got a 51 from Channing Green, a pair of 57s from Chelsea Zeismer and Vivian Tomas, as well as the 59 from Libby Hunsberger.

Malia Holmes, of Otsego, was the medalist as she finished with a 47.