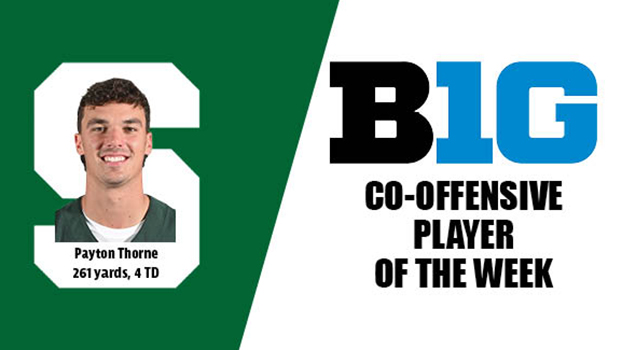 Thorne was also recognized by the Davey O’Brien Award and the Manning Award for having one of the top eight quarterback performances in the nation in Week 3.

Thorne became just the second Spartan quarterback in school history, joining Connor Cook, to throw for four touchdowns in back-to-back games during MSU’s 38-17 victory at then-No. 24 Miami last Saturday at Hard Rock Stadium. Thorne threw for a career-high four touchdowns in the Week 2 win over Youngstown State, and matched that effort against the Hurricanes by completing 18-of-31 passes for 261 yards and four more touchdowns.

The Naperville, Illinois, product first found Kenneth Walker III on a 7-yard screen pass for a score in the second quarter, then connected with Jalen Nailor on an 11-yard touchdown in the third quarter. Thorne’s third touchdown pass of the game came on a third-and-7 play early in the fourth as he hit Jayden Reed in the end zone for a 10-yard touchdown.

Although Thorne ended up with a net of four rushing yards, he scrambled for a 22-yard gain on a third-and-6 play and also converted on fourth-and-1 with a quarterback sneak to propel a touchdown drive late in the fourth quarter to make it 31-17 in favor of MSU. Thorne finished the eight-play, 75-yard drive by finding Nailor in the end zone for a 39-yard pass, one play after getting the first down on the quarterback sneak.