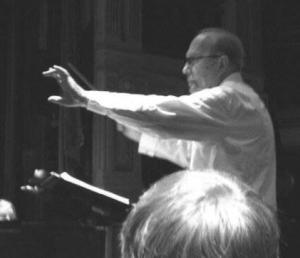 Norman Maclyn Vance, 85, of Coldwater, passed away Thursday, Sept. 16, 2021, at Maple Lawn Medical Care Facility in Coldwater. A graveside service will be held at a later date at California Corners Cemetery in California Township, Michigan. Funeral arrangements are entrusted to Dutcher Funeral Home in Coldwater.

He was born Dec. 31, 1935, to Arlin M. and Lylla M. (Adams) Vance in Coldwater, Michigan, where his family has deep roots. Norm had a passion for music from his early days and went on to become a successful band director. He began his teaching career at North Adams Public Schools and later was director of bands at Dowagiac Union Schools. He completed his career at Olivet Community Schools, where he led bands in both middle and high schools to unprecedented first-division ratings in both concert and marching competitions. Music was a constant thread in his life. He directed Sweet Adelines in Hillsdale, directed church choirs and organized dance bands in Dowagiac, and sang in both the Battle Creek and Branch County Barbershop chapters. Until very recently he was a member and associate conductor of the Branch County Community Band, of which he was very proud.

Norm was an early adopter of technology and was quite skilled with computers as early as the 1980s. He designed a website for his family genealogy research, and connected daily with his many friends and family through Facebook. Norm was a member of California Community Church in California Township, and was proud that his grandparents were among the founders of that church and are commemorated there with a family plaque.

In addition to his passions for music and genealogy, Norm had a great appreciation for the outdoors. He was an avid fisherman and loved spending time in, and working on, the many boats he owned throughout his life.

Norm was a 1953 graduate of Jonesville High School and earned his bachelor’s degree from Hillsdale College.

He was preceded in death by his parents and his daughter Tamara L. Vance, and his brother Leland Vance. Memorials are suggested to Animal Aid of Branch County (AABC), attention Patti Fosdick at Luedder’s Shoe Store in Coldwater

The family invites you to leave a memory or photo by clicking the “Memory Wall” tab on Norm’s obituary page at dutcherfh.com.