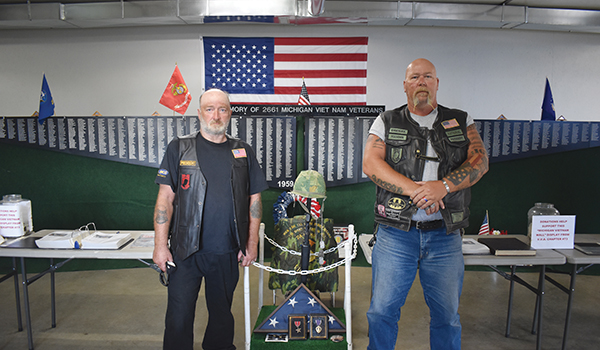 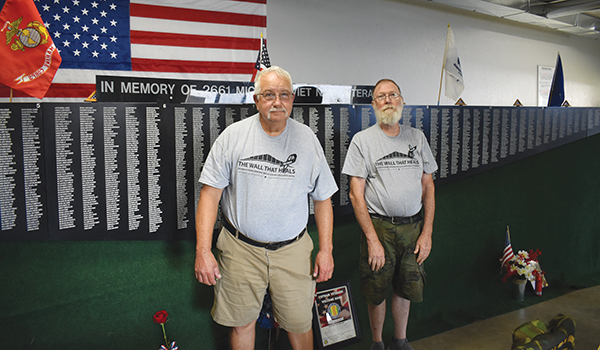 EDWARDSBURG — This weekend, the Edwardsburg community gave long overdue recognition to those who lost their lives in the Vietnam War.

From Friday to Sunday, Michigan’s Traveling Vietnam Memorial Wall was on display at the Edwardsburg Veterans of Foreign Wars, 69946 M-62, Edwardsburg. The weekend showing of the wall was accompanied by a ceremony, 21-gun salute, breakfasts and Sunday lunch.

The memorial is dedicated to the memory of the 2,661 men and women of the state of Michigan who lost their lives in the Vietnam War. The names of each are etched into the memorial that regularly travels across the state.

“When we first saw the wall, we knew wanted to have it here to let our Vietnam vets know we support them,” said Edwardsburg VFW President Steve Curtis. “It’s a good way to keep their memory alive and show our young people that people made a sacrifice and to give them the recognition they deserve for it.”

“The Vietnam vets didn’t get a lot of recognition when they came home, so it’s great that we can bring something like this to our community,” added James Stevens, National president of Warrior’s Oath.

According to those who transported the wall from town to town regularly, the memorial both provides education to local communities and healing to veterans and their families.

Bill Ricketts and Fred Troost, veterans with Vietnam Veterans of America Chapter 73, based out of Holland, Michigan, have been escorting the wall around the state for several years — Ricketts roughly five years and Troost more than 20. In that time, they have seen the wall have a profound effect on those who view it.

“It is strictly an honor to honor those who are that wall,” Ricketts said. “It’s our pleasure to honor those guys and the lady on that wall. They deserve it. … That wall has helped a lot of veterans.”

“I’ve got nine men on that wall, so I’ve got to keep [the wall] moving for them,” Troost added. “This wall means something.”

They added that the traveling wall makes it easier for locals and loved ones to honor Michigan’s fallen Vietnam veterans, as they do not have to travel all the way to Washing ton D.C. to view the official U.S. Vietnam War Memorial.

“This is a blessing for the mothers of the ones who are on that wall,” Ricketts said. “There’s no way they could go all the way to D.C. as far as the expense and the distance and their age. This way, they are able to see their sons’ names on that wall when otherwise they wouldn’t be able to do it.”

All involved said the wall was well received by the Edwardsburg community, starting with the trip transporting the wall into town down to the minute it left.

“It was amazing,” Stevens said. “The community really showed their support.”

Though the wall departed from Edwardsburg Sunday evening, those who helped bring it to the community believe its impact will remain.

“I hope people just remember the sacrifice Vietnam veterans made,” Stevens said. “When Vietnam veterans came home, they couldn’t be proud. They didn’t get the parades we got or their fathers got, so now, with all the kids that are coming through, that they will finally get that recognition, and [residents] will begin to say ‘thank you.’”