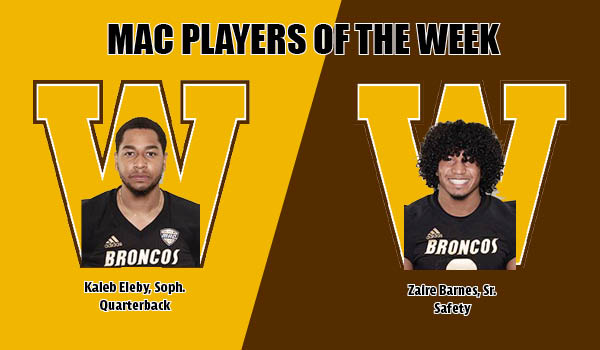 Eleby picked apart Pittsburgh’s defense in WMU’s 44-41 victory over the Panthers on Saturday. He had season highs in completions with 23, passing yards with 336 and touchdown passes with three.

Eleby has now thrown for five touchdowns on the season and zero interceptions. Saturday’s win was just his second game against a Power 5 conference team.

Barnes had a career-high 10 tackles in the win over Pitt, including two tackles for loss. He also recovered two fumbles, both which led to WMU touchdowns that proved pivotal in the victory. This is the first player of the week honor for Barnes in his career at WMU.

Western Michigan is back at home this weekend hosting Mountain West Champions San Jose State at 2 p.m. Saturday. Tickets are available at wmubroncos.com/tickets and at 1 (888) 4-WMUTIX.