Spartans knock off No. 24-ranked Miami 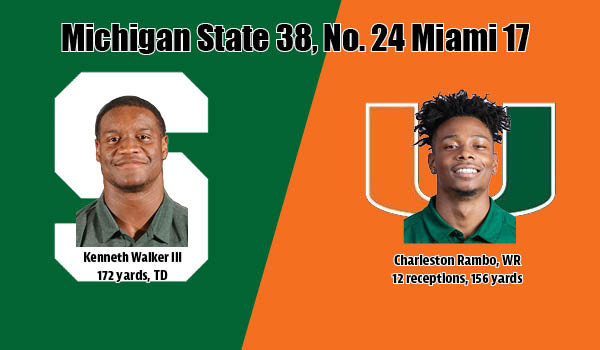 MIAMI GARDENS, Fla. — Kenneth Walker III rushed for 172 yards and Payton Thorne was 18-of-31 passing for 261 yards and four touchdowns as Michigan State topped No. 24 Miami, 38-17, on Saturday afternoon at Hard Rock Stadium.

With the victory, Michigan State improved to 3-0 on the season for the first time since 2015.

The Spartans forced four turnovers in the game and didn’t commit a turnover in the win. MSU collected 454 yards of total offense, with a balanced attack of 193 yards on the ground and 261 through the air.

Jalen Nailor had four catches for 82 yards and two touchdowns for MSU, while Connor Heyward had three grabs for 49 yards. Defensively, Xavier Henderson led the Spartans in tackles for the third game in a row with eight stops.

After a scoreless first quarter for both teams, the Spartans got on the board early in the second quarter as Matt Coghlin connected on a 23-yard field goal at the 13:58 mark to cap a 12-play, 73-yard drive.

Miami responded with a touchdown on its next series, going 75 yards on 10 plays. Charleston Rambo caught a 3-yard touchdown pass from D’Eriq King to put the Hurricanes on top, 7-3, with 10:08 left in the half; Rambo had five receptions for 70 yards on the drive and finished with 12 catches for 156 yards in the game.

MSU increased its advantage to 17-7 at the 6:08 mark in the third quarter as Thorne connected on an 11-yard strike to Jalen Nailor. Walker accounted for 49 rushing yards on the 10-play, 85-yard drive that took 3:59 off the clock.

Miami trimmed its deficit to 17-14 with 3:53 left in the third on Rambo’s second touchdown grab, this time from 14 yards out.

With the Hurricanes gaining momentum early in the fourth quarter, Drew Beesley came up with a strip sack on King and Jacub Panasiuk picked up the fumble for the Spartans. MSU quickly capitalized three plays later with Thorne finding Reed in the end zone on third-and-7 for a 10-yard touchdown with 13:10 remaining in the game.

With under five minutes in the game, MSU elected to go for it on fourth-and-1 from the Miami 40, and Thorne ran a quarterback sneak for a first down. On the next play, Thorne connected with Nailor on a 39-yard touchdown pass to give MSU a 31-14 lead.

Ronald Williams recorded MSU’s fourth turnover of the game with an interception on Miami’s next series, and the Spartans again took advantage of the takeaway with another touchdown drive, capped by Reed’s 8-yard scamper into the end zone to make the final 38-17.

Michigan State returns to action Saturday, as it hosts Nebraska at 7 p.m. in Spartan Stadium. The game will be televised on FS1.