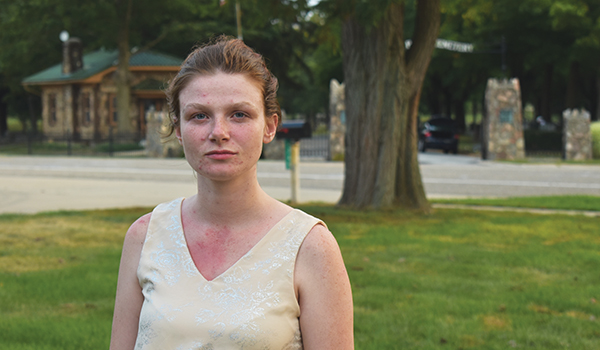 Alisa Weaver, 24, was at home with her children when a bullet was shot into her apartment. She and her family have been driven from their N. Fifth Street home due to concerns over their safety. (Leader photos/SARAH CULTON) 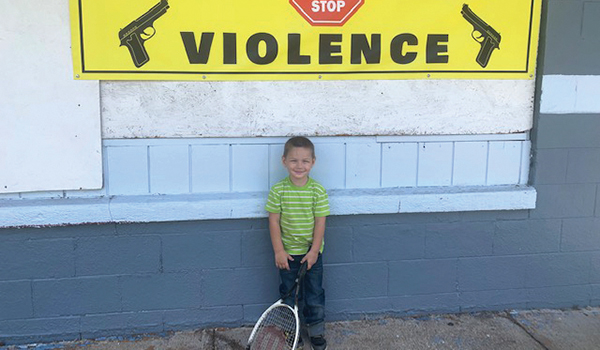 Councilmember Georgia Boggs has placed a sign on her building asking for an end to gun violence. Pictured is Weaver’s son. (Submitted photo) 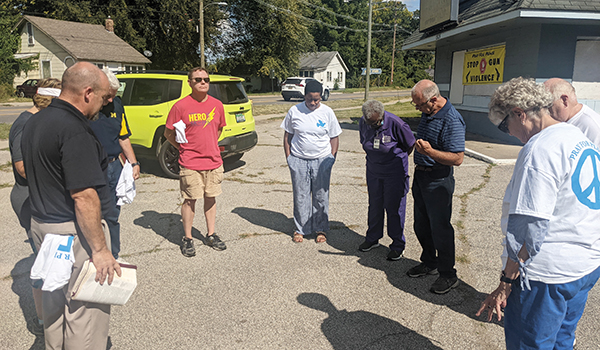 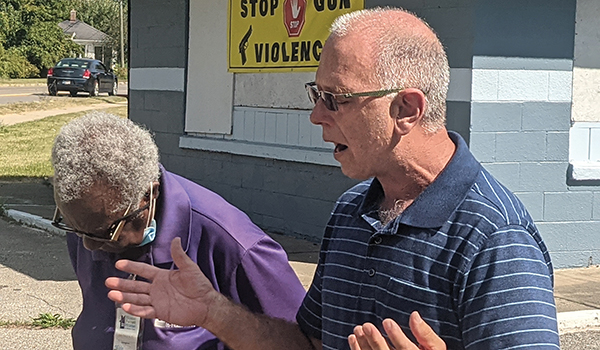 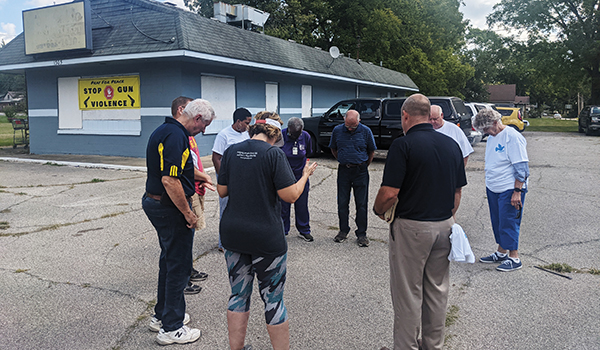 NILES — The evening of Tuesday, Aug. 31 was a night like any other for Niles resident Alisa Weaver.

After making her three children a dinner of cheese quesadillas, she sat down at the kitchen table, planner in hand, and set about making a to-do list for the week and mapping school schedules. While her daughters were in the next room brushing their teeth and preparing for bed, Weaver’s 3-year-old son — her youngest — remained seated next to her at the table, enjoying a treat of spicy potato chips before beginning his nightly routine.

All of this was normal for Weaver, 24, of the 1000 block of N. Fifth Street — just an average night as she waited for her husband to return home from work. However, when she heard a faint pop come from her downstairs neighbor’s apartment, she could not have known that her average night would turn into one of the most frightening of her life.

“The first pop was so faint, I gave [my neighbors] the benefit of the doubt,” she said. “I didn’t know what happened — maybe they had just dropped something. I didn’t know something bad was going to happen.”

Less than five minutes later, the faint pop became a loud boom as a bullet launched through the floor, splintered up the kitchen table and lodged into the ceiling. Weaver’s apartment had been shot into from below, the bullet coming so close to her son’s face it shattered the plate of chips in front of him.

“I couldn’t feel anything. I was in shock,” Weaver said, fighting back tears as she recalled the memory. “I couldn’t talk. I couldn’t breathe. All I could do was hold onto him for dear life.”

Weaver’s story is just one example of what residents in Niles’ first ward see as an increase in gun violence in the community. Over the summer, several shootings have been reported in the area, including incidents on June 13, Aug. 9, Aug. 13 and Aug. 16. Now, residents of the community are speaking out, asking that their homes be made safe again.

“I want my children’s voice heard, and I want justice for my family,” Weaver said. “I want justice for all the families on Poplar Street who can’t share their feelings. It feels like nothing is being done about it.”

The Aug. 31 incident is not the only time Weaver’s family has witnessed gun violence in their community. Earlier that month, they heard gunshots outside their home, one of which shot through their downstairs neighbor’s window, according to photos shared with Leader Publications.

Weaver is not the only first ward resident concerned about increasing gun violence.

At a town hall meeting hosted Tuesday evening, several residents showed up to the Niles City Council Chambers on E. Main Street to share their concerns with police.

One such citizen was Leah Bloom, of Lake Street. Living in Niles since 2011, she said she has never seen violence in her community until recently.

“This has been the nicest, quietest neighborhood, and there was never any violence,” she said. “I feel helpless. I just feel things changing, and [peaceful residents] are the majority, but it feels like we have a minority that is going to tell us what to do. The only way we can change this is to not let these people do that.”

Tuesday’s meeting was organized by long-time Niles City Councilmember Georgia Boggs, representing the first ward. The meeting was just one program in a series of efforts Boggs has taken to address the gun violence in her neighborhood. Every Friday she and other residents have hosted prayer vigils to stop the violence, and she also placed a large banner printed with the phrase “Pray for peace. Stop gun violence” outside her building.

A councilwoman for more than 20 years, Boggs said only she started seeing gun violence and increased crime occur in her neighborhood this year.

“We’ve never had gun violence in our neighborhood. Never,” she said. “It makes me sad because I raised my family here, and it was a place where you never had to lock your doors.”

According to data released by the Niles Police Department, offenses involving a weapon in some way have been slowly increasing over the past several years — from 17 in 2017 to 38 in 2021 so far. These offenses include robberies, felonies, assaults and general weapons offenses including careless/reckless firing, carrying in a pistol-free zone, firearm in auto and use or possession of a firearm under the influence. Police noted that one incident could result in multiple offenses.

Niles Director of Public Safety Jim Millin said there are several factors that could attribute to the increase, including changes in how offenses are recorded.

Many of the recent shootings in the city can be attributed to an ongoing feud between two groups of people, he said. Last month, 17-year-old Johntae Williamson was arrested in connection to a shooting at Eighth and Poplar streets that left a 20-year-old man injured. Police said they believe that shooting was related to the feud.

Millin could not say whether the shooting at the Weaver residence on N. Fifth Street was related to the ongoing feud. He said police have an open investigation into the case and want to do what they can to keep the family safe.

“It’s an open investigation, so there is not much I can say,” Millin said. “Certainly, it’s disturbing, and no one wants to live in that situation where bullets are coming through their floor. … We are working with the landlord.”

Despite police efforts, Weaver remains frustrated at the response to her case. As of this week, the downstairs tenants she believes fired into her home remain. As she and her family no longer feel safe in their apartment, they have left, relying on their church and the generosity of others to help house them for the time being. Thursday, Weaver and her husband launched a GoFundMe page titled Victims of Gun Violence in the hopes of raising enough money to move into a new building.

“I don’t think I will ever feel safe here again,” Weaver said. “This used to be our home, our comfort zone. I was always so happy here, but now all I can think about when I walk through the door is the memory of what happened. All I feel is fear.”

To help end the gun crime — or any crime — in the first ward, Millin said it will take a community effort.

“These individuals know their community better than anyone,” he said. “We have a police department, and we are here to serve the people, but that doesn’t mean that people shouldn’t be involved. When people see things, hear things and know things involving criminal activity in their neighborhood, they need to reach out and make sure the police are informed of it. The police can use that information to further their investigation and hopefully get the resolution that citizens want, and that is to find the people responsible and hold them accountable. It won’t happen if it’s just the police department. It needs to be a working cooperative between the people who live in these neighborhoods and the police department that is here to serve them.”

Boggs agreed, saying she wishes for her community to go back to the time when neighbors looked out for one another.