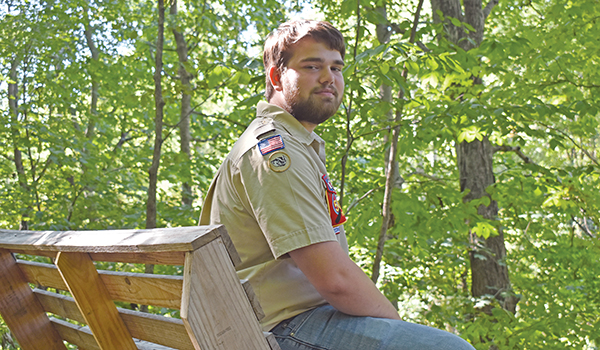 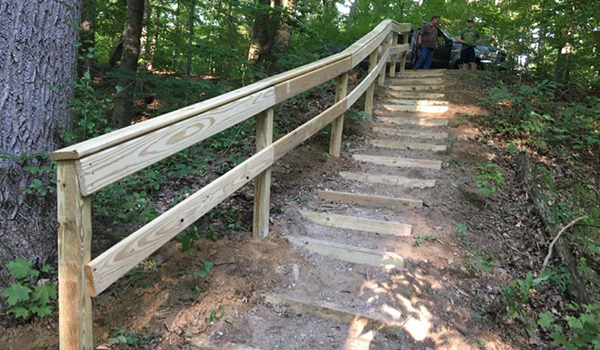 BUCHANAN — A Niles teen recently took the final step toward a lifelong dream — by making steps for others.

Kyle Welch, 18, of Boy Scout Troop 541, recently installed stairs, a railing and a bench on Buchanan’s McCoy Creek Trail as part of his Eagle Scout project. The project, which was finished days before his 18th birthday, was one of the final steps he had to take to apply for Eagle Scout, the highest rank in the Boy Scouts of America.

“For Eagle Scout, we have to complete a project that benefits the community,” the teen said as he walked down the trail.

Welch said he was inspired to build stairs on the trail after his mother was unable to go down one of the hills as it was too steep.

“She worried she would fall, and I realized that was probably a hazard for a lot of people because there is no real way to get down there safely,” Welch said. “I decided I wanted to put some steps here.”

He also chose to build on the McCoy Creek Trail as Troop 541 has a long history of supporting the trail, and many others have completed Eagle Scout projects on it.

“I think it’s special that we’ve done so much [on the trail],” Welch said.

The project, which was almost entirely funded by donations, took more than three days for Welch and a group of helpers to install. Now that his Eagle Scout project is complete, Welch said it feels “surreal” that he is accomplishing a goal many years in the making.

“It almost doesn’t feel real,” he said. “I’ve always wanted to be the first Eagle Scout in my family, and it’s one of those things that keeps me going.”

Welch said he is proud of his Eagle Scout project — and he is not the only one. His mother, Traci Welch, who inspired the stairs, said she could not be happier that her son chose to give back to the community in this way.

“I’m just so proud,” she said. “There are no other words. I’m just really proud.”

Once he is officially inducted as an Eagle Scout, Welch has plans to go to college and eventually return to the Boy Scouts to serve as a scoutmaster. Until then, the teen said he hopes the community can enjoy the stairs and bench on the McCoy Creek Trail for years to come.

“I hope it will really help,” he said. “The benches are put in really scenic places so people can enjoy what’s around them. … I just hope people use It and enjoy it.”