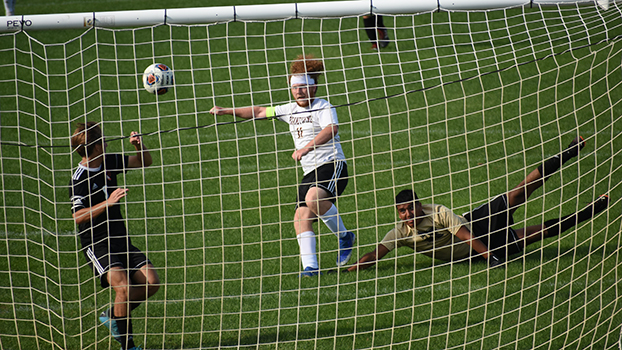 NILES — Between the rain and lines of thunderstorms that rolled through southwest Michigan Tuesday afternoon and evening, the Brandywine and Dowagiac soccer teams were able to squeeze in matches.

The Niles cross country team also was able to get its Wolverine Conference meet at Three Rivers in before the weather closed in.

The Bobcats were only able to get 40 minutes of their match in with Howardsville Christian before lightning forced the cancellation of the second half.

Isaac Martinez and Andrew Schadler both scored goals for Brandywine in the first half, which gave the Bobcats the 2-0 victory.

The Bobcats are back on the pitch today as they host New Buffalo in a BCS Athletic Conference match. Play is scheduled to begin at 5 p.m.

The Chieftains made their final tune-up before entering Wolverine Conference play Thursday with a 6-2 win over former conference foe South Haven Tuesday night.

Dowagiac (5-1) scored three goals in each half to come away with the victory.

“It was a well-played and physical game,” said Dowagiac Coach Mike Williams.

Henry and Cole Weller sandwiched an Allex Hernandez goal in the opening 40 minutes of play.

The Chieftains, who travel to Vicksburg today, outshot the Rams 14-7. Alejandro Martinez had three saves for Dowagiac.

Anezka Pradna was the overall winner in the girl’s race with a time of 23:17.

The Vikings did not have enough boys to field a team score against the Wildcats.

Kyler Copenhaver was the overall winner, as he led Three Rivers with a time of 18:59.

Niles’ top finisher was Aiden Krueger, who placed third with a time of 19:33.

The Vikings will run in the Fennville Invitational Saturday.