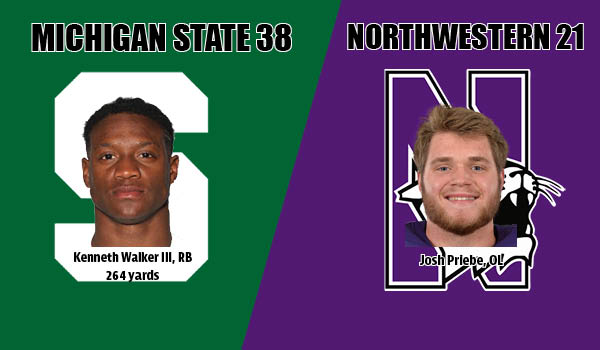 EVANSTON, Ill. — Kenneth Walker III had a Spartan debut to remember as Michigan State opened the 2021 season with a 38-21 victory at Northwestern on Friday night at Ryan Field.

Walker, a junior transfer running back from Wake Forest, rushed for a career-high 264 yards – the seventh-highest total in MSU history — and scored a career-high four touchdowns to lead the Spartans. It marked the most rushing yards by a Spartan in a debut wearing the Green and White.

Overall, MSU racked up 511 yards of total offense, including 326 on the ground.

Payton Thorne made his second career start on 15-of-25 passes for 185 yards and one touchdown to get his first win as the starting quarterback. Thorne’s favorite target was Jayden Reed, who hauled in five catches for 64 yards.

Senior safety Xavier Henderson led the Spartan defense with nine tackles, including two for losses and a sack, while sophomore safety Angelo Grose also had nine stops for the Spartans.

Walker was at it right from the beginning. On the first play from scrimmage, the Arlington, Tennessee, native took his first handoff as a Spartan and raced 75 yards for a touchdown, quickly putting MSU on top.

After Northwestern missed a field goal on its first series, the Spartans put together a 10-play, 74-yard drive, capped by Walker’s second TD of the game on a 3-yard run to take a 14-0 lead midway through the opening quarter.

The Spartans increased their lead to 21-0 on their first series of the second quarter, marching 66 yards on just four plays, finished off by a 14-yard screen pass from Thorne to Jordon Simmons.

Northwestern got on the board late in the half on a fourth-and-goal play where Hunter Johnson found Trey Pugh in the end zone for a 1-yard pass.

Walker scored his third rushing touchdown, a 5-yard burst into the corner of the end zone, at the 7:06 mark in the third quarter to give MSU a 28-7 advantage.

Northwestern responded with a 16-play, 69-yard touchdown drive that took 7:52 off the clock and trimmed the Spartan lead to 28-14.

Matt Coghlin’s 37-yard field goal put the Spartans on top, 31-14, but the Wildcats scored another touchdown with 2:27 left in the game to make it a 10-point game.

That’s when Walker put the game out of reach. After MSU recovered an onside kick, Walker carried the ball three more times — for 4 yards, 30, and then 6 for his fourth and final touchdown of the game with 57 seconds left.