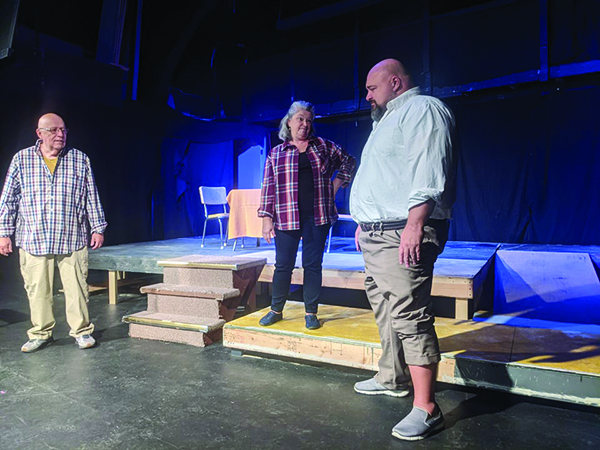 DOWAGIAC — The Beckwith Theatre Company is gearing up for its next production.

The company will be presenting “The Outgoing Tide,” a play by Bruce Graham.

Directed by Richard Frantz, “The Outgoing Tide” centers around a family of three in a small cabin on the bank of Chesapeake Bay. Actor Max Sala portrays Gunner, who has hatched an unorthodox plan to secure his family’s future but meets resistance from his wife, Peg — played by Marilyn Haslett — and son, Jack — portrayed by David Carew — who have plans of their own. As winter approaches, the three must quickly find common ground and come to an understanding before the tide goes out.

Described as “darkly humorous and powerfully emotional”, “The Outgoing Tide” is a play the lead characters are excited to bring to the Beckwith Theatre.

“It’s fantastic,” Haslett said. “We’ve been talking about this play for three years. I think we were thinking about doing it a couple years ago and it kind of got taken off the schedule. Last year, of course, was our COVID year. I wish we felt a little more secure with the COVID situation, but we’re asking our patrons to wear masks and I hope they do; we’re all vaccinated. I hope it’s a safe environment for everybody. It feels fantastic to be back.”

A former Dowagiac Union High School guidance counselor, Haslett has also worked on stage at Southwestern Michigan College, Niles Four Flags Players and The Tin Shop, Buchanan. When Haslett attended the July improv show at the Beckwith — its first show of any kind in more than a year — the sight brought tears to her eyes.

“This place means a lot to all of us,” she said. “ I met my husband doing plays at the Beckwith its first season and three of our four kids have been in Beckwith productions. It just means a lot to everybody.”

According to Frantz, he was inspired to direct the play by his daughter, Aislinn, who is now an associate producer at Chicago Shakespeare Theater. Aslin and many more rose up in the theatre work via the Beckwith Theatre.

“The Beckwith takes great pride that we have developed great talent,” Frantz said. “We’ve had kids go on Broadway and we’ve had kids go into television. Aslin thought of this play because of Max and Marilyn.”

Haslett and Sala have been with the Beckwith Theatre Company since the nonprofit’s inception in 1990 and Carew — a longtime choir director in the area — has been involved with the theatre since the early 2000’s. The trio worked together in Frantz’s “Death of A Salesman” adaptation and are excited to reunite under him once again.

“I have only done three straight-up plays and two of them have been with the same director and parental figures,” Carew said. “It’s been a really great reunion to get to get back with them. I really respect all of them and I love telling stories with them.”

The Beckwith Theatre is a place that is very near to Carew.

“I started teaching in Dowagiac 1998 and did musicals here and just various galas for the theater,” he said. “It’s a really great little theater to be involved in. I have kids and son’s in college. So I’m able to kind of get back into some things. This has been a really nice way to reconnect with the theatre.”

For Sala, the familiarity he feels with his character Gunner was an aspect of the play that appealed to him.

“In a different sort of way, I think I know this guy,” he said. “There are parts of this guy that I know really well and I don’t want to say it’s easy like all I had to do is learn how to memorize the lines but in this case, it’s not really that difficult for me to show up to rehearsal and step out of Max and step into Gunner. A lot of times, we’re portraying someone we’re not and trying to learn about that person. For me, Gunner is somebody that I know fairly well.”

When all is said and done, the main cast hopes the relationship between Gunner, Peg and Jack resonates with the audience.

“There are questions particularly about how we deal with our own mortality, our parents’ mortality and our family systems as a whole,” Carew said. “People may see why it is so important to be able to communicate with your parents and establish those relationships. ..Hopefully people will learn from how the characters talk to each other, communicate their needs and are real with each other.”