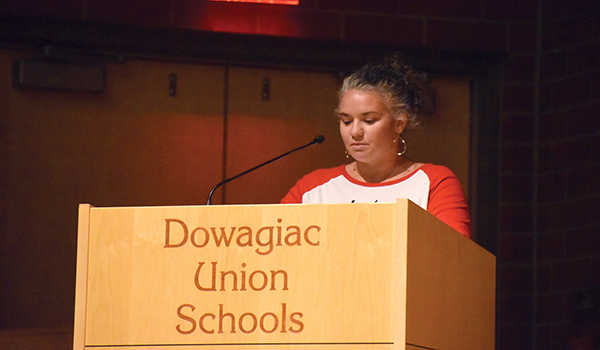 DOWAGIAC — Dowagiac Union Schools Board members are taking a second look at changes made to student schedules after a strong response from parents.

Tuesday evening at a special board meeting, board members voted to have the district reevaluate recent changes made to class start times and lunch/recess times.

Also changed in time were the schools’ lunch and recess sessions, which were cut by 12 minutes, reducing the daily break from 42 minutes to 30 minutes.

Superintendent Jonathan Whan said the changes had been made to accommodate additional instructional and teacher prep time.

Prior to the vote, several parents addressed the board to express their concerns over the changes. Common complaints included concern over how reduced lunch and recess time affected children and how the later elementary start times made it difficult for working parents to make it to their jobs on time.

First to the podium was Sam Ausra, who volunteers in the schools. She feared that the decrease in lunch and recess time would affect student focus by not allowing them enough time to expend their energy.

“Twelve minutes. It doesn’t sound like that big of a deal, but I wonder if you have ever seen an elementary school lunchtime,” she said. “I have, and it’s not enough time.”

Next to address the board was parent Stephanie Lyons. She expressed disappointment with the change in schedule and the short notice parents were given. She said she is aware the change has caused significant disruption to many parents’ work and appointment schedules.

“As parents, we plan our daily schedules around our children’s school schedule, whether it be for work or daycare,” she said. “When things change, it affects the whole process.”

One of the last parents to address the issue was Kirstin Ausra, parent to two elementary students.

“I’m here tonight because of the changes that have happened at the schools that were just recently communicated,” she said. “Although 20 minutes might not seem like a ton of time, it is significant when trying to make transportation arrangements on short notice. Last Thursday’s notice gave families about 86 hours to change their schedules and adjust their start times, and only gave them one business day to work out an agreement with their employer.”

“As a parent, I can relate to some of the issues you are having,” he said, addressing the audience. “I want more instructional time more than anyone, but not at the expense of our kids.”

The motion was approved unanimously and met with a large round of applause from the audience.

By Tuesday morning, Superintendent Jonathan Whan was looking at bus schedules and working to find a solution to start and lunchtimes. Though he said finding a solution would be complicated as elementary start and end times affect middle and high school times and both staff and transportation needed to be involved, he hoped to have information and proposed solutions to the board by next week. Depending on how much notice the board decides to give families, Whan said the changes could be implemented five to seven days after the information is sent to the board.

“We are studying things to see if we can make something happen,” Whan said.