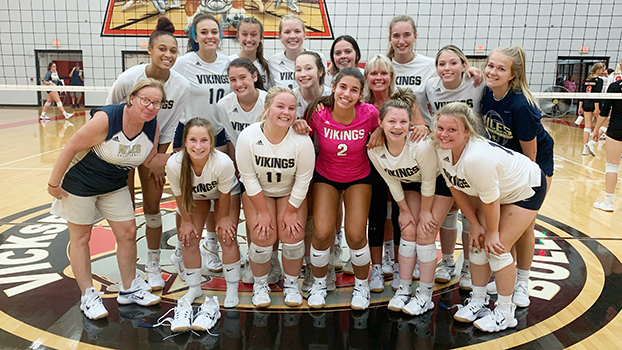 VICKSBURG — The Niles volleyball team accomplished its goal at the Vicksburg Six Pack according to veteran Coach Jenny Nate Monday.

“The Niles varsity volleyball team arrived at Vicksburg on a mission — sweep all opponents one point at a time,” she said.

Rival Lakeshore was no match for Niles either as it cruised to 25-14 and 25-16 victory, which improved its overall record to 12-3.

“I am incredibly proud of my team tonight,” Nate said. “Despite coming off of the weekend and playing in tough back-to-back tournaments Friday and Saturday, they didn’t miss a beat tonight and were able to maintain their energy for five matches. These girls worked so hard during the summer, and their time, effort, and endurance is really showing up on long nights like tonight when they are able to maintain their focus, energy, and control runs set after set and match after match.”

Niles has a deep square this season and Nate is not afraid to use that depth.

“We have a lot of talent and depth this season, and all of our players played at various times throughout the night,” she said. “They were able to stay focused and win no matter which players were on the court which is a strength of this team. They truly support and trust one another, and they are outstanding teammates. We look forward to getting a good night’s sleep, and then we are back at it tomorrow in another challenging quad at Hamilton.”

The Vikings continue their marathon of early matches at the Hamilton Quad, which is scheduled to begin at 4 p.m.

The Niles JV volleyball team went 3-0 at its own quad Monday night.

The Vikings defeated St. Joseph, Edwardsburg and Lakeshore, all in two sets.

“We had a vengeance to beat St. Joe tonight and not let them take another one from us, and that is exactly what we did,” said Niles Coach Sammee Schaller. We were focused, played smart ball, and had good energy. This was a big win for us to gain our confidence back and be able to go undefeated at home.”

Niles is now 11-1-2 on the year. The Vikings host Sturgis Wednesday as they play their first-ever Wolverine Conference match.