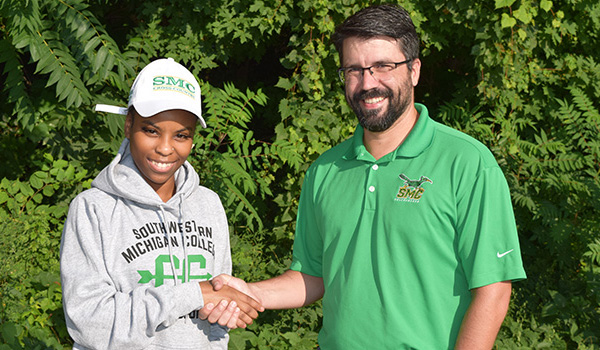 “My mom ran track in school,” Smith said. “It’s like a family thing. I tried out for cheer and one day I ran with them and the coach came to me and said, ‘You’ve got pretty good speed. Have you ever run track?’ The only other sport I get into is volleyball. I’m little and skinny, just a normal girl, and I think I can take advantage of that.”

“[Running] is peace of mind to me,” Smith said. “Me, I’m an overthinker and worry too much. When I run, I don’t think about anything. There’s a big field down the street from me that I jog around in the morning before work” at Harbor Graphics, a screen printer and embroiderer which has been producing custom apparel, signs, banners and promotional items since 1993.

She plans to study nursing.

‘I have a soft spot for kids. That’s what I want to do as I get older is help people and to travel around the world to places I’ve never been. I want to explore,” she said. “I look everything up on the internet and read up on it, so I read about travel nursing to see what I would have to do to reach my goals.”

Asked how she connected with SMC, Smith replied, “It’s funny because I wasn’t really thinking about college until my parents brought it up to me my junior year of high school. My cousin told me about SMC, so I looked it up. It seemed like it could be good for me. When I visited, I really liked it. [Cross country] is something I want to do, even though I’m nervous.”

She is the only girl of five children and lives in Benton Harbor with her mother.

“I’m the second-oldest,” she said. Her father lives in South Bend.

Her exposure to her teammates so far amounts to participating in a group chat online the day before, but “they seem pretty cool.”