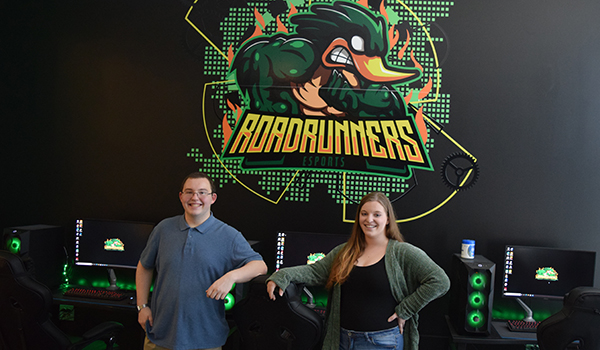 DOWAGIAC — “I don’t know what I was expecting, but this is better,” Brooke Johnson said about Southwestern Michigan College’s new Esports Arena in the Barbara Wood Building on the Dowagiac campus.

Johnson is not a video gamer, but a May graphic design graduate. She collaborated with 2021 classmate Eli Craft, of Niles, to design decals to transform a glass-walled former lounge arrayed with overstuffed chairs fitted with desk flaps.

Between bold graphics and 12 student-built computers, the very-visible room off the lobby is like a colorful aquarium freshly filled with tropical fish, plus lights twinkling against the black background.

Craft, Johnson and other students submitted designs as a class project for Assistant Professor Sam Walker, then esports members voted on elements they liked.

“They liked the darker background from mine and her design with it, so we collaborated to come up with this,” said Craft, transferring to Central Michigan University for a bachelor’s degree in fine arts for book design.

“For the rest of our projects, we had to go outside the college and find clients, like an internship, to help us build our portfolios,” Johnson said. “We worked with Nathan (Reverman, former president of the club) quite a bit throughout the project to find out what they wanted for their room — budget, colors, themes. Eli and I worked together for the final phase to incorporate our ideas.”

Johnson, now employed professionally as a graphic designer for Leader Publications, came to SMC from Schoolcraft and initially studied accounting. She continued to her bachelor’s degree in accounting through Ferris State University while working in the business office.

“I tagged along with some friends on a campus tour and fell in love with SMC right away,” she said. “I felt so comfortable here. The instructors in the art program are a step above. Originally, I was dead set on going to Grand Valley.”

Reverman’s presidential successor, Adam Frye, is a networking major from Elkhart who plans to continue to a Ferris State computer information technology degree. Reverman moved up from treasurer when founder John Monnin transferred to Purdue.

“With new members,” said Frye, who built one of the machines, “I’m sure we’re going to expand the list of games we play. My next objective is figuring out tournaments.”

“This is probably one of the fastest-growing sports right now,” he said, “because it’s so easy to do. You don’t have to leave your house if you don’t want to.”

“The college purchased components that the students assembled,” Clayborn said. “Students came to us and said they wanted an esports environment on campus. They recommended the equipment, so they’re able to apply what they learned in class and manage the security of the environment. We worked with the Office of Information Technology to make sure everything’s secure before we used it. This was done during the summer of 2020. We weren’t able to use this space as much as we wanted (in 2020-21) because of state COVID-19 limitations, but we did some competitions from home. We followed the rules and used it when we were allowed. Last year, obviously, was complicated.”

“This fall we will have open-play hours where anyone can use it as long as one of our officers can monitor everything,” Pitre said. “There are tournaments we could do in person, but we don’t have to travel. That’s kind of the beauty of esports.”

Pitre expects fall club sports to also consist of flag football and men’s and women’s soccer. “I plan on doing four intramurals, Monday-Thursday, with a different one each day — a disc golf league, basketball, volleyball and softball.”

“We’re looking for a league we can join,” said Executive Director of Campus Life Jeff Hooks. “There’s no travel budget because we could play the University of Alabama from here. We’ll be able to play schools all over the country. It will also be a recruiting tool as we bring in high school teams to play each other. We already had people checking it out at orientation because it’s super eye-catching, a complete 180 from what the room looked like before.”