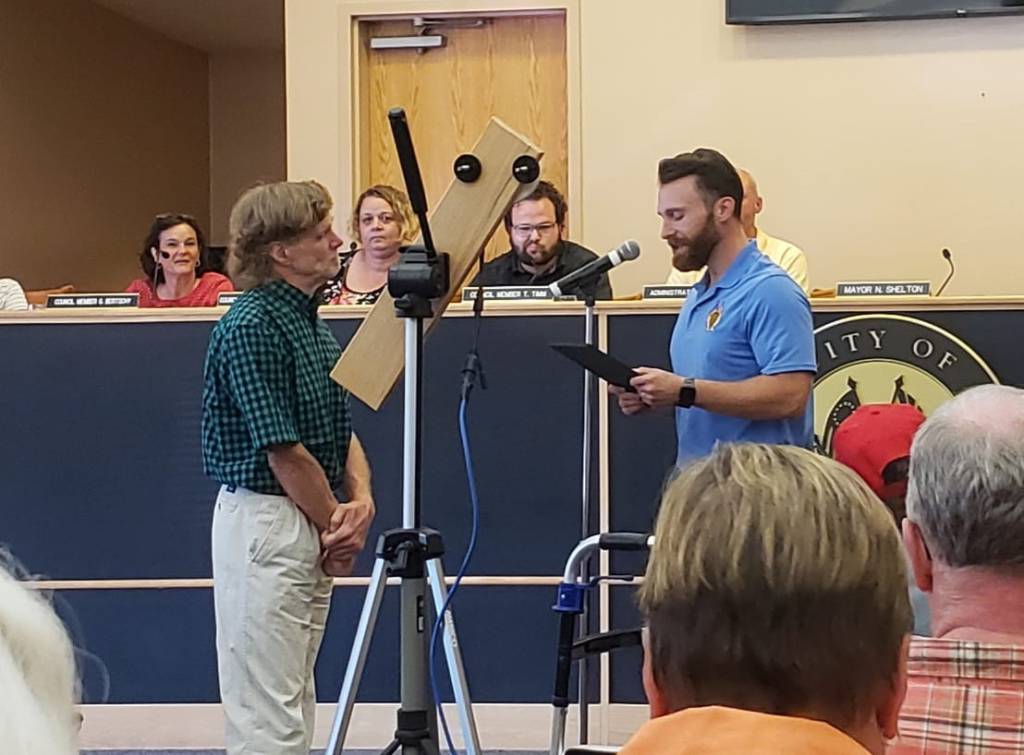 NILES — Earlier this summer, Niles residents and visitors were treated to a bit of a makeover in the downtown district, as several volunteers pitched in to beautify the plants around Main Street.

Among those volunteers was a quiet, humble man who has called Niles his home his whole life. Though hard of hearing, Timothy O’Toole rarely meets a stranger and is happy to roll up his sleeves and give back to his community. This is why, during Monday night’s city council meeting, O’Toole was awarded a Certificate of Appreciation on behalf of the city.

Mayor Nick Shelton presented the award and told those in attendance that O’Toole is a lifelong Niles resident who enjoys spending time with his family.

“Tim also loves the outdoors,” Shelton said shortly after embracing O’Toole in a hug. “You may have seen him riding his bike around town. If he’s not riding his bike, Tim can be seen walking all over the city. A few favorite destinations in particular include both the Riverfront Park area and The NODE.”

Multiple times throughout his speech, Shelton paused as O’Toole, who communicates by reading lips, wiped tears from his eyes.

“That love of the outdoors sparked a desire to help his community flourish,” Shelton added. “He has been volunteering downtown for the past year, working to provide lovely flowerbeds in our city.”

Shelton said O’Toole is a member of the newly formed River Essence group, which is the group that volunteered to take care of the downtown planters.

“His efforts downtown have given citizens hope for a bright summer following the long COVID-19 pandemic,” Shelton said. “Tim truly embodies what it means to be an outstanding member of our city, and we are so proud to have him here today. … Mr. O’Toole, we thank you for your service to this community and your never-ending commitment to bettering the city of Niles for your fellow neighbor.”